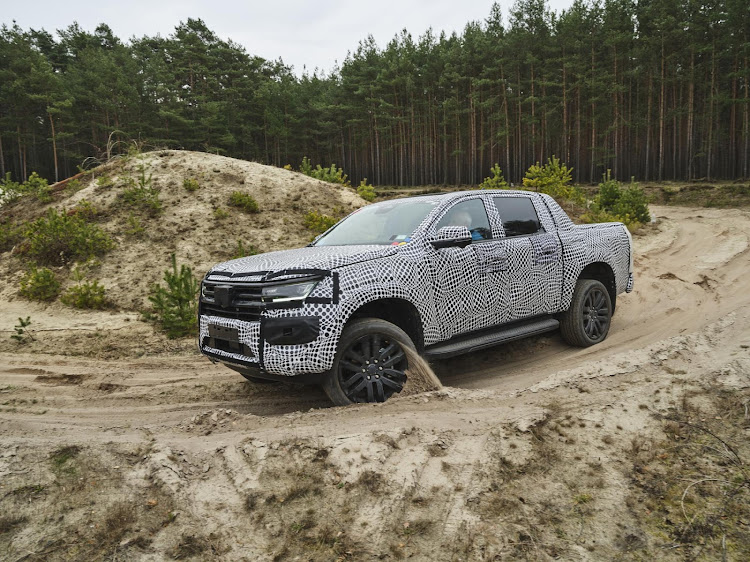 The new Volkswagen Amarok is larger and more macho than the outgoing model.
Image: Supplied

Volkswagen on Tuesday released photographs of its all-new Amarok clad in psychedelic automotive camouflage. Set to be launched at the end of 2022, the German carmaker supplemented these hypnotic visual teasers with a bit more information about what this Toyota Hilux/Ford Ranger rival will be bringing to the ultra-competitive bakkie party.

Out of the blocks the second-generation Amarok is noticeably bigger than the model it replaces. Measuring 5,350mm from nose to tail, Volkswagen claims that this newcomer is 100mm longer while the wheelbase has been stretched from 3,095mm up to 3,270mm — a tweak that will treat front and rear passengers to considerably more interior space. At the same time Volkswagen has shortened both the front and rear overhangs, which not only pays dividends in terms of aesthetics but also improves the vehicle's off-road capability.

The Wolfsburg-based firm says that payload is increasing to up to 1.2 tonnes and that a maximum towing capacity of 3.5 tonnes is possible across more engine/gearbox variants.

Powering the new Amarok will be a choice of one petrol and four diesel engines, including an upgraded version of the powerful 3.0l V6 TDI used in the outgoing model — a favourite among the TimesLIVE Motoring team. These modern internal combustion mills will send their power to the ground via either a rear-wheel drive, on-demand or permanent all-wheel drive system. Volkswagen says customers can also expect to be met by an array of preconfigured driving modes that will keep them safe and in control no matter where the road — or trailhead — takes them. Enhanced safety for all occupants is provided by more than 30 driver-assist systems, over 20 of which are completely new to the Amarok. 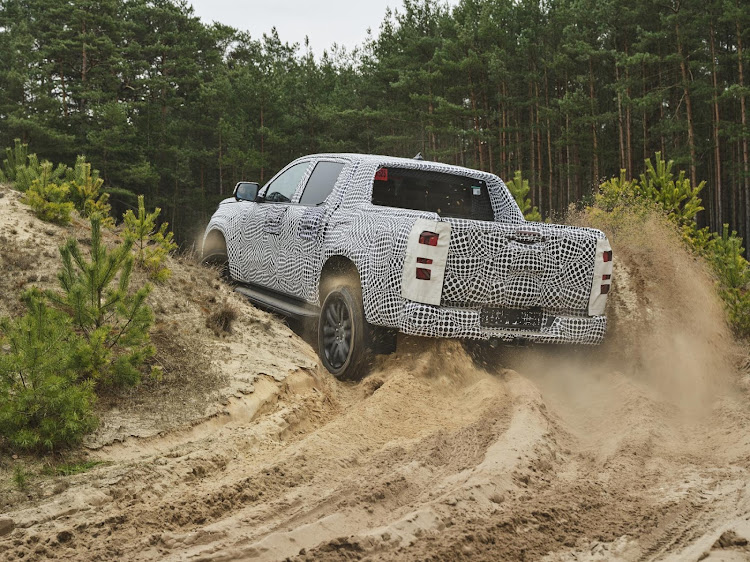 Almost the entire width of the tailgate will be embossed with the word 'Amarok.'
Image: Supplied

Now while all that stick-on body camouflage is there to purposely puzzle our peepers, we can see that the new Amarok lays claim to a much bolder front end where a straight and upright bonnet meet with a revised radiator grille design and a pair of ultra-narrow LED headlamps. The latter can be upgraded to Volkswagen's fancy IQ.Light LED matrix units for superior night-time driving performance. Chunky new wheel-arches will be able to accommodate wheels up to 21-inches in size while the rear tailgate is now framed by LED taillamp clusters and features the word 'Amarok' embossed across almost its whole width.

From launch Volkswagen will be offering its new bakkie in five distinctive trim derivatives starting with the entry-level model known simply as the 'Amarok.' Next up are the two mid-tier 'Life' and 'Style' models while the upper echelons of the range are set to be occupied by the off-road biased ‘PanAmericana’ and more road road-focused ‘Aventura.’

Depending on the model you can look forward to a top quality interior festooned with niceties such as a digital cockpit and newly designed tablet-style infotainment display. A few notable options include an exclusive sound system as well as elegant leather-look surfaces applied to the instrument and door panels with distinctive decorative stitching. Volkswagen is also proud to mention the Amarok's updated seating that affords drivers and front-seat passengers with widened and more comfortable seats that can be specced with optional electric 10-way adjustment. Meanwhile the rear has space for three adults.

More details will no doubt be revealed closer to launch so watch this space for updates.

Everything you need to know about the new BMW 7 Series

Scheduled to arrive in SA in November, the car is able to store steering movements over distances of up to 200-meters and subsequently reproduce them ...
Lifestyle
4 weeks ago