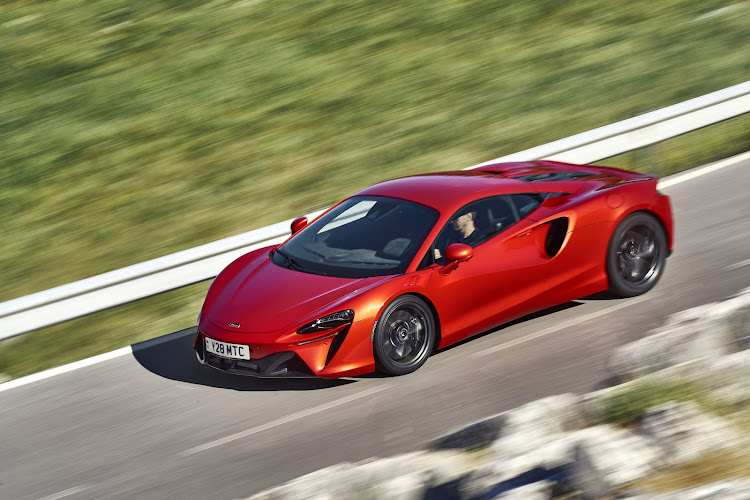 The British company embarks on a new era of electrification with the new Artura hybrid. Picture: SUPPLIED

It always feels as though McLaren has been around for decades. Its place in Formula 1 history makes it one of the most famous names in the automotive industry, but while McLaren Cars created such supercars as the incredible McLaren F1 and the Mercedes-Benz SLR McLaren, its road car division is relatively new.

The first chapter of its modern story began when McLaren Automotive was formed in 2010 and its first model was the MP4-12C. Since then it has been busy, but now it’s time not just for a new chapter, but possibly a whole new book.

That book opens with the debut of the new Artura hybrid as the British company embarks on a new era of electrification. Described by a company spokesperson as “the summation of everything we’ve learnt so far at McLaren”, we arrived in Marbella, Spain with high expectations.

We weren’t disappointed. While there is some familiarity in design, the Artura is brand new from the ground up. There’s a new McLaren Lightweight Architecture including a new carbon fibre monocoque. The twin-turbo V6 is joined by an axial flux electric motor that contributes 70kW and 225Nm to the Artura’s total power output of 500kW and 720Nm.

Five of the most affordable vehicles to fill up in June

With the price of petrol currently at an all-time high, filling your car's fuel tank can be something of an eye-watering experience. With this in ...
Lifestyle
2 weeks ago

The motor pairs with an eight-speed Seamless Shift Gearbox that features four driving modes: Comfort, Sport, Track and, crucially, Electric. Yes you can drive the new Artura through your local CBD in pure electric mode, actually for up to 31km. It even starts in electric mode, which will upset those who like a supercar to start in full attack noise mode, but the neighbours will be happy.

There’s new tech too, including the first ethernet architecture in a car and the debut of the first Pirelli Cyber Tyre, a tyre which communicates directly with the car and which we are likely to see much more of as cars become even more connected to each other and to infrastructure.

It also feels new inside, especially from a quality perspective. Everything fits together well and there’s an air of quality in the materials. Despite all the tech, there’s a minimalist, driver-focused feel to the interior. The touchscreen infotainment screen has one physical rotary dial that’s easy to use and the whole thing is placed below the eye line to allow you to focus on the drive. 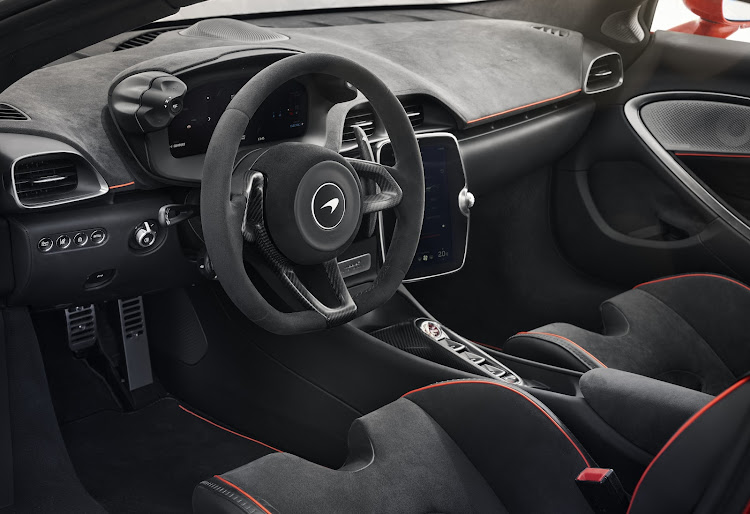 There’s an air of quality in the materials, and despite all the tech there’s a minimalist, driver-focused feel to the interior. Picture: SUPPLIED

If you want to change the radio station, use the stalk and the menus in the new digital instrument cluster. Here too there are new rockers on the side of the binnacle for changing transmission and suspension modes rather than buttons on the steering wheel.

We put it to the test on some superb roads in the Ronda region and on the fantastic Ascari Race Resort circuit, which has just been resurfaced to provide more grip.

Yes we toddled through town in electric mode, which felt weird, but quickly dialled things up to Sport and Track mode, playing with different combinations of transmission and suspension settings. Even on slightly bumpy Spanish roads, the Artura feels playful but precise, more so than rivals from Maranello and Sant’Agata and here’s the big revelation: it feels on a par with the Porsche 911 when it comes to not just steering feel, but the way the car seems to be balanced around a central point. 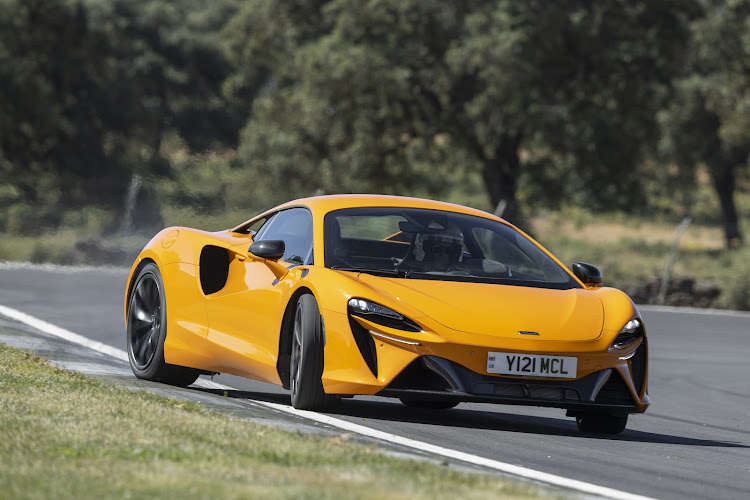 Tenacious grip, superb power delivery and communication that feels as though you can change your mind mid corner. Picture: SUPPLIED

The engine responds instantly and it all seems properly dialled in, so much so that it could well be the McLaren of choice, even over higher models.

On the Ascari circuit it took only a few laps to build confidence and realise that it will do whatever you ask of it. We revelled in the tenacious levels of grip, superb power delivery and that communication that always feels as though you can change your mind mid corner and the Artura will simply oblige.

It is a very well set-up thing, which makes it a pity that McLaren is having some teething problems with the Artura, which has been delayed a few times and while we had no issues with the car we drove, others on the launch did.

That’s unfortunate because it really does feel as though a true match for the 911 has emerged from the McLaren Technology Centre in Woking. It’s powerful, responsive, communicative and still has that everyday usability that was so inherent in the character of the MP4-12C. There might need to be some first chapter editing, but the next book of McLaren is looking very promising.

Deliveries start in August at a starting price of R4.9m.