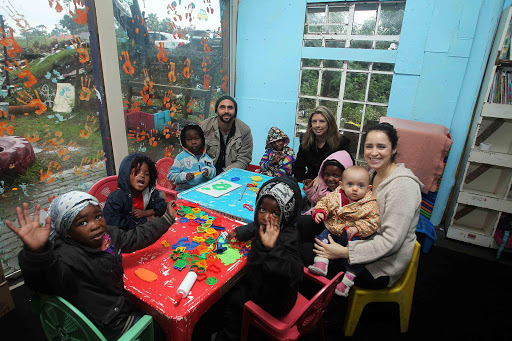 HELPING HAND: The Minter couple together with Michelle Pretorius from Johnson and Johnson, surrounded by some of the children from the dumpsite Picture: SIBONGILE NGALWA
A compassionate couple who adopted a community at a dumpsite as their family in Stoney Drift near Amalinda have been named as local heroes.

Joshua Minter, affectionately known as Ceba (councillor) on the dumpsite and his wife, Rachael, say serving the community is not just about missionary work, but they are merely taking care of family.

The couple, who have been heavily involved in the community for the past two years, had initially collected clothes and food for children until they saw a need to help everybody in the community.

They spend R3000 on groceries monthly, feeding the community three meals a day and nutritional soup. Volunteer doctors and social workers come in regularly to attend to a community in which 40% of children have tuberculoses and many are malnourished.

They received a hamper of Johnson & Johnson wet wipes after being selected as Daily Dispatch/J&J local heroes.

“Our credo, written more than 70 years ago by the son of one of our company’s founders, guides us to be good citizens and to support good works and charities,” she said.

The Local Heroes Campaign is a wonderful vehicle to do just that. It celebrates the efforts of ordinary citizens doing what they can to improve the lives of others. We’re really proud to be part of this.”

Rachael said the couple initially started helping with a soup kitchen once a week started by Irene Erasmus, but took over and expanded to help the community.

Erasmus is the founder of the NGO Uthixo Ulungile Ministeries.

The Minter couple feeds the community five days a week with vegetables from their garden and run a creche, baby care centre, and a church. They rely on donations.

“We want to take it to another level and supply the community with grocery packs monthly and that they intend to the packs from next month.”

Among their many programmes, is a once-a-month bath day where under-12 children are soaked in a hot tub and and bathed by the six volunteers who receive a monthly stipend.

“For the past three months Johnson & Johnson has been helping us a lot, donating toiletries and wipes, some of which we give out to the parents on bath day to help them keep their children clean.

Minter said J&J also painted their creche inside and out which gave it a cheerful look.

Yesterday, Michelle Pretorius from J&J arrived at the dumpsite with many boxes of wet wipes, saying they hoped to inspire other companies and individuals to make a difference no matter how small. — mbalit@dispatch.co.za