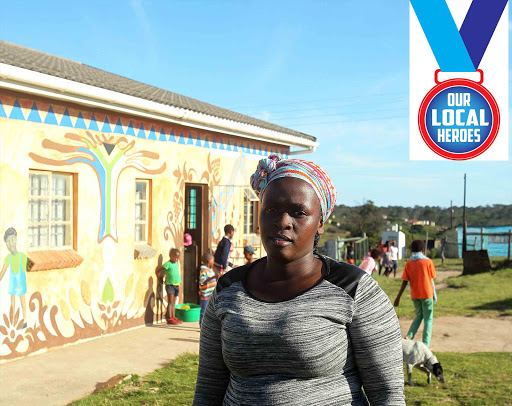 MIRACLE WORKER: Caring Noxolo Ndzimande of Ncera Village serves more than 80 children daily Picture: SIBONGILE NGALWA
Giving a hand in a community where children were raised in the absence of their parents inspired Noxolo Ndzimela to volunteer at a centre in Ncera Village, which feeds children and assists them with their homework.

The centre, Philisa, is now run by her with the help of two volunteers.

Ndzimela, 29, a mother of two, joined a venture initiated by women from the community when she was only 21 and the venture has since grown into a trusted local organisation.

Philisa has also expanded into a bigger structure, offering more activities for children.

“I was young and unemployed. I was driven by the fact that I wanted to create a conducive environment for children with the hope that, they would get an education and make something of their lives,” Ndzimela said.

She said it made a big difference to the lives of children when they “know that they have people who support them”.

“Most of the children don’t have parents and those that do, come from struggling parents who battle to make ends meet.

“Here we try to fill the void so that the children are not affected by the situation at home.”

Ndzimela said more than 50 children aged between three and 18 were recognised by the institution as the most needy and put on a register.

However, no child who came to the centre for food was ever turned away.

“In a case study, we have identified 53 kids who live with grandparents and come from financially unfit homes.

“Those are the children we have committed to giving clothes to and feeding, although more than 80 children sometimes come for a meal and we welcome them.”

Robert Prestwich, who nominated Ndzimela for the award, said Ndzimela was a pioneer of many initiatives in the village which benefited the community.

“She is a cracking networker and has been funded by local churches, individuals and organisations overseas.

“She involved herself in the start of a clinic at the Philisa centre and was instrumental in the creation of the new clinic building which was all created by the community. Not a cent came from government.”