Loving care for babies in need 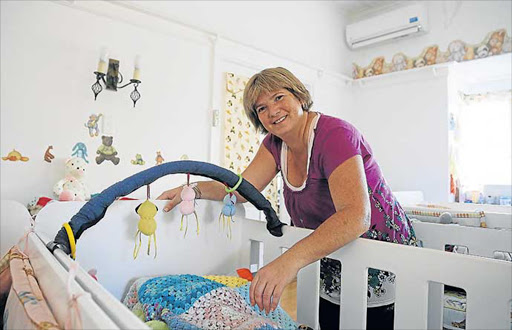 DEDICATED: Local hero Bev Gunton takes cares of a baby at the Breath of Life in Selborne
One hundred abandoned Buffalo City Metro babies have found care and love in a suburban home.

Breath of Life, a place of safety in Selborne, East London, has just taken in its 100th baby.

The home is operated and supported by volunteers.

Established in 2009 as a non-profit organisation under the Restore Trust of Stirling Baptist Church, Breath of Life has also assisted more than 14000 young women grappling with crisis pregnancies.

The extraordinary statistics tell a story of hard work and dedication from people who step forward to help and never leave, a story that has earned nominations for Chris and Bev Gunton as Local Heroes.

The couple were formally named by fellow volunteer Angela Barter, but when the Daily Dispatch contacted Barter it turned out that the “entire Breath of Life team” had put the Guntons’ names forward.

Barter and the Guntons said the Restore Trust was made up of Breath of Life – where abandoned babies are cared for and placed in appropriate social programmes – and a crisis pregnancy centre, where women with unplanned or unwanted pregnancies are cared for and counselled.

The first priority of the programme is to get babies back to their biological families.

If this is not achieved after 60 days, the babies are eligible for adoption.

To date 37 babies have been reunited with their biological families and 57 have been adopted.

Chris, who works as a project manager, and Bev, a housewife, have been volunteers at Place of Safety for two years.

They started off fostering a one-year-old abandoned baby, whom they have since adopted, and in December they adopted a second baby who turns one soon.

Bev spoke passionately about how the work instilled in her a profound sense of serenity. “It is a beautiful place. It is very special to me.”

Anyone thinking of volunteering was more than welcome to visit – and they, too, would find it hard to leave, she said.

The home is under the authority of a dedicated coordinator, Elaine Brenkman, who said she had received a great deal of professional and personal help from the couple.

When Brenkman was diagnosed with cancer last year, Chris and Bev assisted by providing meals for her family and helped with the day-to-day care of the Breath of Life babies.

The Gunton family also assisted with the move to new premises in March and managed the renovations of the new house.

Together with the social development department, Breath of Life identifies prospective parents through a selection process, which sees orphaned babies placed in suitable Christian families, or with guardian parents who provide love, compassion, resources and attention.

The centre struggles for money and Brenkman said she was surprised and proud that they had made it this far.

She was optimistic about the future, saying she believed they would get the extra two much-needed homes and many, many more volunteers.

On average, it costs R180 a baby a day, which, when multiplied by the maximum of six babies at any given time, adds up to R33000 a month.

“Most importantly they need you, and the babies need love,” the Dispatch was told.

lTo get involved or for more information contact Brenkman at bolbabyhouse@gmail.com