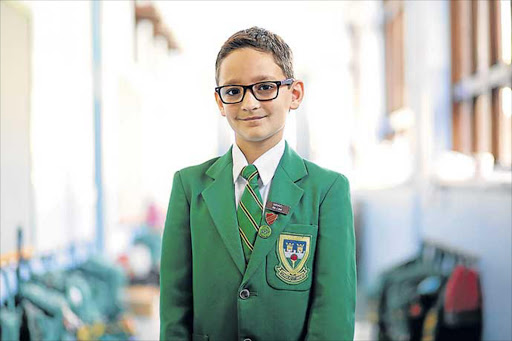 KIND SOUL: Stirling Primary School’s Brad Blom put 200 sandwiches together from money he received on his birthday Picture: MARK ANDREWS
Celebrating his birthday by giving back to others less fortunate is something young Brad Blom plans to do every year to make a difference in the lives of others.

Blom, a Grade 3 pupil at Stirling Primary who turned nine on February 16, raised R2000 from his family and friends.

The aspiring Olympic swimmer said he wanted to put a smile on the faces of a few impoverished people every year on his birthday.

“I started doing this while I was in Grade 1. People had given me presents and money on my birthday and at the time I wasn’t sure what to spend it on, because I have everything I need and want. That is when I remembered that there are other children out there who are not as fortunate as me.

Blom said that in Grade 1 he surprised his teacher when he came to school with 40 sarmies and in Grade 2 saved up for 100 sandwiches.

“At school, we have committed every Tuesday to collecting love sandwiches which are later distributed to less fortunate schools, so that is where I got the idea to put in more effort.”

Blom’s mother, Kelly, said she hoped her son’s philanthropy would spread through to his younger brother Blake.

“Brad is such a loving boy who is very considerate of other people which is evident in what he has initiated.”

Head of the WE CARE group at Stirling Primary, Donne Cadle, said the sandwiches were collected throughout affluent East London schools by the Nahoon Methodist Church which redistributed them to impoverished schools within the Buffalo City Metro and surrounding areas. —mbalit@dispatch.co.za