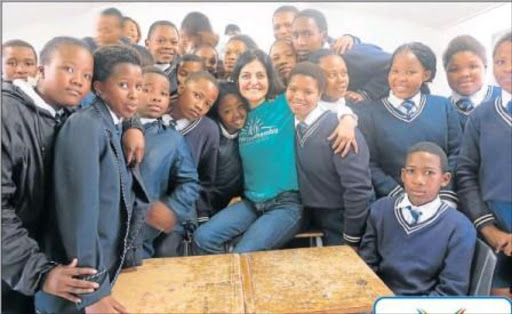 OPENING the doors of education for disadvantaged children of Fort White community outside Alice fits in with Mexican-born Teresita Ndibongo’s own experience as the child of a poor village.

She and her Eastern Cape husband Quinton gave up their lives in the United States to return to his home.

The couple wanted to give back to the community.

Ndibongo, a mathematics teacher, has set up non-governmental organisation, Indawoyethemba (Place of Hope) in Alice.

She started a matric bootcamp for 12th graders and a leadership academy for eighth graders with the aim being to inspire and uplift local youth.

So far 72 matrics from rural schools around Alice are signed up for the boot camps which are held during school holidays and will prepare learners for their finals.

Boarding facilities are provided for boot camp participants but schools are expected to find funds to transport and feed the pupils during the programme, while Teresita offers her facilities, math lessons and entertainment.

Parents step in and come and cook for the kids.

Teresita says the rural villages around Alice are not a far jump from the small village of Guanaceví in Mexico where she grew up and that she understands very well what it feels like to grow up in a disadvantaged community.

One good thing she never forgot was the feeling of being motivated and inspired by her teachers. She wants to pass on this teaching tradition.

“I am not here to build (a position) for myself. We are looking for a young person from this community to eventually take over,” said Ndibongo.

For her it’s all about building relationships with the schools and working closely with the community.

The academy has taken in 24 pupils from local schools who are showing leadership qualities.

Academy students are expected to go back to their communities and identify needs.

The students then must return to the academy, present the issues and devise and run a project which seeks to provide a solution.

Ndibongo said the projects were a stimulating challenge for pupils.But the aim is to motivate them to do better and for them to have great, great projects that will change their lives and the lives of those around them for the better

“They are young and still learning. There are pupils here who barely make it. Some drop out. But the aim is to motivate them to do better and for them to have great, great projects that will change their lives and the lives of those around them for the better,” said Ndibongo.

By October, with participation from two more schools, there will be 45 students in the academy.

Bongile Sikane, a Grade 9 pupil from Mdibane Secondary, said his water project inspired by his time in the academy was giving him confidence to talk truth to power.

The project seeks to provide taps for the community.

“It was difficult at first, especially being young, to approach the (Nkonkobe) municipality about something so big.

“I did not think they would take me seriously and I was given the run-around for a while, being referred from one office to the other.

“But I was determined to excel and told myself that if they did not help me, I would start another project,” said Sikane.

His next project is to get the municipality to fix the community’s gravel roads.

Along with all her NGO work, Teresita is also offering daily extra mathematics classes to schools. She also tries to get help where she can, even collecting donations for those in need.