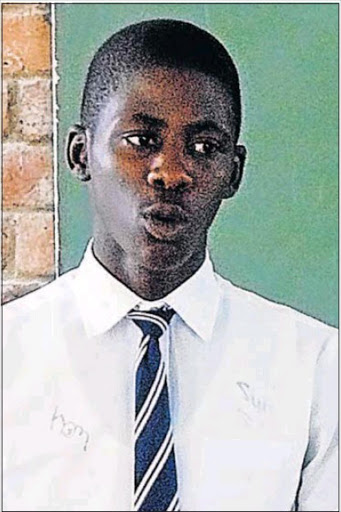 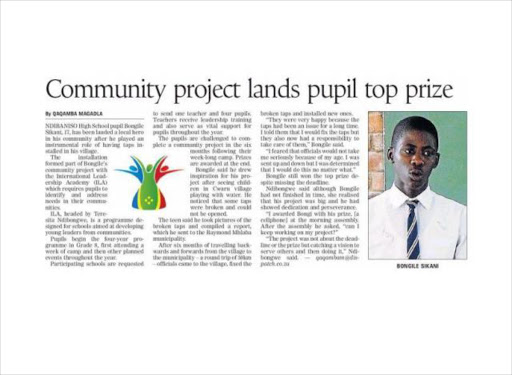 NDIBANISO High School pupil Bongile Sikani, 17, has been lauded a local hero in his community after he played an instrumental role of having taps installed in his village.

The installation formed part of Bongile’s community project with the International Leadership Academy (ILA) which requires pupils to identify and address needs in their communities.

ILA, headed by Teresita Ndibongwe, is a programme designed for schools aimed at developing young leaders from communities.

Pupils begin the four-year programme in Grade 8, first attending a week of camp and then other planned events throughout the year.

The pupils are challenged to complete a community project in the six months following their week-long camp.

Bongile said he drew inspiration for his project after seeing children in Cwaru village playing with water.

He noticed that some taps were broken and could not be opened. The teen said he took pictures of the broken taps and compiled a report, which he sent to the Raymond Mhlaba municipality.

After six months of travelling backwards and forwards from the village to the municipality – a round trip of 50km – officials came to the village, fixed broken taps and installed new ones.

“They were very happy because the taps had been an issue for a long time. I told them that I would fix the taps but they also now had a responsibility to take care of them,” Bongile said.

“I feared that officials would not take me seriously because of my age. I was sent up and down but I was determined that I would do this no matter what.”

Bongile still won the top prize despite missing the deadline.

Ndibongwe said although Bongile had not finished in time, she realised that his project was big and he had showed dedication and perseverance.

“I awarded Bongi with his prize, at the morning assembly. After the assembly he asked, “can I keep working on my project?”

“The project was not about the deadline or the prize but catching a vision to serve others and then doing it,” Ndibongwe said.