She has offered psychosocial and emotional support, transport, meals and accommodation to children with cancer and their families for more than a decade – and has no plan to slow down. 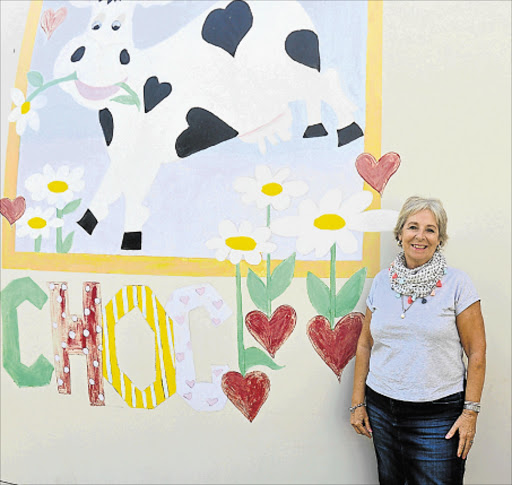 CAPTAIN MY CAPTAIN: Choc Eastern Cape regional manager Debbie Kleinenberg has taken the foundation from strength to strength in her 12 years at the helm Picture: RANDELL ROSKRUGE

The foundation accommodates children from the time they are diagnosed with cancer at the colourful Choc house in Edge Road in East London’s Beacon Bay.

The patients, who range from infants to 15-year-olds, are accommodated at no cost and are transported to hospital.

The house, which has 19 beds covered in character linens, is also open to private patients. Kleinenberg does not allow children to be admitted at the house without an elder. They currently have 27 volunteers.

“Children get attached to the volunteers. We are fortunate because the ones we have, have been around for some time now.

“I feel that the success of Choc in East London is because of the excellent relationship and support I have from my staff, committee and volunteers.

“I feel so blessed to do a job that I am passionate about without financial remuneration but with satisfaction,” she said.

Kleinenberg, who taught for 25 years, walked away from the profession wanting a new challenge. Choosing to work with cancer patients was easy, as her father died of leukaemia.

And now, through Choc, Kleinenberg is helping scores of families to better manage and deal with the disease.

An unemployed single mother from Qumbu was at the Choc house with her toddler, 3, when the Daily Dispatch team visited the premises. She heaped praise on Kleinenberg, saying she had saved R560 on transport as Choc transported her and her little one to hospital.

“We arrived here last week. If it was not for Choc I would have to travel every week for three weeks at R140 per week.

“I don’t work. They have been so great. The week went by so fast. I’m so grateful to the social worker who suggested we come here,” she said.

Thandile Cuntu, a Choc social worker who provides full psychosocial services, has worked closely with Kleinenberg for five years. “My duty is to support the families and children and sometimes it gets too much for me. But Debbie makes my job a lot easier. She offers me counselling services whenever I need it because she understands what I go through every day because she is hands on in the ward.

“Having a person like her as a manager reduces the load. I can easily talk to her, she is very considerate I can tell you.”

The biggest challenge for the foundation is not being able to track down the families of the children when they do not come back for treatment.

Choc plans to embark on a campaign to educate people in rural areas about cancer. “There are so many stigmas around cancer –myths and false beliefs. We want to promote Western medicine, although we don’t see ourselves in conflict with traditional medicine. But if it hasn’t worked then they could try Western medication with the cancer,” Kleinenberg said.

The foundation also offers bereavement counselling and long-term counselling and relationships with the families. Every year in November they have a remembrance service for lost loved ones. “Our goal is to walk the whole journey with them,” she said. — lisekhom@dispatch.co.za