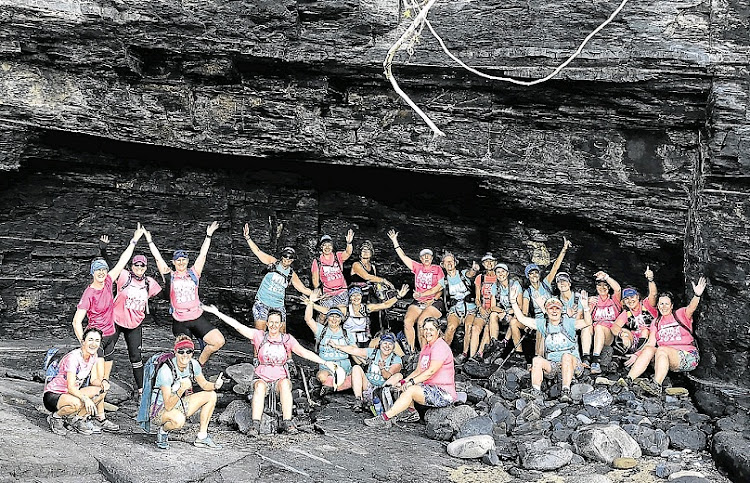 Wild Women on the Run have managed to raise over R200000 – their largest amount to date – for their chosen charities, African Angels and Busfare Babies. The group is comprised of ordinary women who do extraordinary things in an effort to give back to the community.
Image: SUPPLIED

Wild Women on The Run (WWOTR) have managed to raise over R200000 – their largest amount to date – for their chosen charities, African Angels and Busfare Babies.

Starting out seven years ago aiming to get fit and give back to the community, the group comprises ordinary women, who do extraordinary things to raise funds ahead of the group’s annual trail run.

This event has 25 women tackling a 100km trail run along the Wild Coast over three days, with each WWOTR member having to fulfil minimum fundraising requirements in order to take part in the run.

This year, the route saw Wild Women runners make their way from Kobb Inn to the Anchorage Hotel along the coast.

Both of the charities we support are woman-owned and rely heavily on donations and fundraising efforts.

“When we started Wild Women, we just thought it would be a bunch of us running the Wild Coast on an epic adventure, but it has turned into so much more than that,” said WWOTR member, Lisa van Wyk.

“Both of the charities [we support] are woman-owned and rely heavily on donations and fundraising efforts. A big part of Wild Women is being able to give back, but it’s also about supporting and encouraging each other, and loving our bodies for what they can do, not what they look like.”

The initiative saw the two post their daily training routine on social media, getting friends and family to sponsor each day leading up to the run as well as the days over which the run took place. The two also had supporter shirts made, selling them to raise funds.

“This was my first Wild Women run and I was very nervous. The training was really tough. I started running, slowly and steadily following a weekly routine which included early morning runs at 4.30am and longer runs on the weekend. My running soon inspired my family to join. Now I am joined by my husband and 11-year-old son,” said Rossouw, a neurologist at Frere Hospital, who managed to juggle her demanding role and the duties of a Wild Woman with the support of her family.

Spring, a local OBGYN at a private practice, said that fitting in work, family, training and fundraising is challenging and requires a lot of commitment and dedication, but she has found a way to make it work.

“I train early in the morning so the impact of training on family time is minimised. Work is a challenge too at times, but somehow I manage to fit everything in,” said Spring, who runs to the Beacon Bay Life Hospital, from her Bunkers Hill home, in order to stay fit for the run and complete her ward rounds over weekends when she is on call. Adamant to participate in this year’s Wild Women event after relocating to Beijing last year, fellow Wild Woman and founding member, Lucille van der Merwe took to training along the Great Wall of China. Van der Merwe soon motivated good friend, Kate Godde to train with her and to fly back to SA to take part in the event. Together, they raised over R60000 from their overseas supporters.

A Wild Women calendar, conceptualised by founding member, Kim van Kets and fellow Wild Woman, Kerry-Lyn Honey, managed to raise over R30000 through sales. Since their inception, Wild Women on the Run have raised over R660000 for their chosen charities and have seen 58 women join in on the effort. — madeleinec@dispatch.co.za

For more than 200 children at some poor schools in East London, wearing worn-out shoes is now a thing of the past. This is because last year’s Daily ...
News
3 years ago

Mom ensures kids are not hungry going to school

We know that hungry tummies can lead to distracted pupils, but this is a sad reality for many South African children. For a Parkridge mother the ...
Local Heroes
4 years ago

Nominate your personal hero who impacts others

Do you have a local hero you believe is deserving of recognition? Is there someone in your community who goes the extra mile to make a difference ...
News
4 years ago