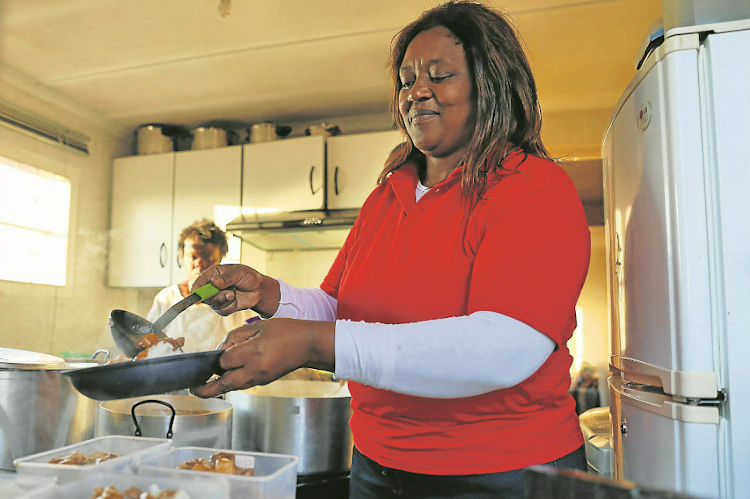 NU15 resident Ntombizanele Vellem preparing meal for the children. She is teaching them life skills and feeding them at least twice a week in a display of sincere generosity
Image: Sibongile Ngalwa

Fifty or more children in NU15 in Mdantsane are being equipped with life skills and have improved their reading – all thanks to the founder of Ubuhle Bezwe (beauty of the world) – the Wise Girlz.

This is the work of primary school teacher Ntombizanele Vellem, who worried ceaselessly about the many little girls she saw roaming around the streets, exposed to many dangers.

That worry worm got the better of her and in 2016 Vellem made a life-changing decision to get up and do something meaningful for herself and society.

She opted for education and found a way to keep young girls in her neighbourhood busy with new and positive activities – to prevent them from repeating the mistakes she made as a teenager.

While the older girls are provided with life lessons and read books suitable for their age, the littles ones are given toys to play with. They also practice activities such as umxhentso.

Ubuhle Bezwe: the Wise Girlz started off with only girls until Vellem realised that the girls she was trying to protect would later be exposed to the boys she neglected. From then on the boys were also invited for grooming.

The organisation’s message is straightforward: no sex before marriage, no alcohol, drugs and prostitution, and all focus must be on education. Good behaviour and walking in dignity and pride are highly promoted by the organisation.

“It is so sad because our area is filled with shebeens and other bad things. I was also a young girl once. I made my own mistakes and now I wish I can show others how to do better,” She said.

She started off with only a few kids, bringing snacks to entertain the few she had but also to encourage those who didn’t want to join to come into the circle.

Within two months her four-roomed house was packed with children and she could no longer buy the snacks from her own pocket. She went out looking for sponsors who gave her staple foods which she kept until one day she decided to do a solid cook-up. To her surprise the children loved the food and even adults in the vicinity would come for a plate.

The project runs afternoon sessions twice, and even when the weather is rough the girls insist on squeezing in Vellem’s lounge.

Local businesses help Vellem with ingredients for her soup kitchen. Her dream is to be able to feed every destitute household in her community and nobody gets turned away on Wednesday afternoons when she has cooked, now with the help of her neighbours who have joined her community cause.

She would love to get a space where she would be able to help the girls with homework and have more educational programmes, such as teaching computer skills and beadwork.

One of the project members, Asimanye Mbovane, a 14-year-old who aspires to be a doctor, said: “I love going there. A lot of children that I know who don’t come have been affected by teenage pregnancy. Some drink. Maybe if they came they wouldn’t drink. We are taught to focus on school and I enjoy the activities that we do.”

Neighbour Mamntlane Mbovane, who has four grandchildren that attend Ubuhle Bezwe meetings, said she would like them to extend the days because she is at ease when her kids are there.

“I wish ‘Misi’ could extend her days at least to four times a week because ever since they started going there their behaviour has changed. She is doing a wonderful job,” she said.