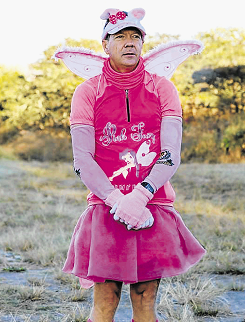 Mike Webb, also known as The Pink Fairy has, to date, raised over R300000 for the King William’s Town SPCA, by running the Comrades Marathon dressed in pink, complete with fairy wings.
Image: Supplied

After running his 12th consecutive Comrades Marathon eight years ago, King William’s Town’s Mike Webb, also known as the Pink Fairy, decided to spice things up and do his next Comrades in aid of the Pink Drive initiative.

He did this by wearing pink fairy wings when running.

Since then, every Comrades Webb has run, has been in aid of his chosen organisation, the King William’s Town SPCA.

“My first run with pink wings on was so much fun and I saw the potential to do some good with it so the Pink Fairy idea was born.

“It started out by accident in a way, but I’m really glad it grew and I took it further,” said Webb.

“I chose the King SPCA because my family and I are all huge animal lovers and because the organisation does incredible work over a wide area and they really need support.”

Using different methods to fundraise each year, including getting the public to pledge a certain amount per kilometre he runs, as well as selling “giant” puzzle pieces and a “nude“ calendar, Webb has raised over R300000 for the KWT SPCA in the last six years.

Taking part in his 20th Comrades this year, Webb decided to do 10 big races culminating in finishing the Comrades, all in aid of charity.

Webb’s main fundraising event was the Pink Fairy Tour de Border, through which he managed to raise over R45000 for various SPCAs in the region.

“I decided it was time to try and help as many SPCAs as I could in our region so I cycled and ran over 650km to raise funds.

“Apart from the money, we also managed to collect large amounts of dog and cat food in each town. The response in each town was fantastic and we were looked after amazingly everywhere,” said Webb who visited East London, Port Alfred, Stutterheim, Fort Beaufort and Komani on his tour.

King William’s Town SPCA committee member and volunteer senior inspector Annette Rademeyer said she was extremely grateful to Webb and his fundraising was a tremendous help.

“In a small town like King, we would never be able to raise as much as he raises in one event.

“We really appreciate his efforts because the funds he manages to raise, help to keep us going,” said Rademeyer who added that on a weekly to bi-weekly basis, the SPCA spends at least R6000 just on dog food.

While fundraising for and supporting the SPCA is the Pink Fairy’s main goal, Webb also regularly visits schools dressed in his pink attire in an effort to inspire, educate and raise funds.

“My main aim at schools is to encourage a sense of caring not only for animals, but also for each other, and to stop bullying in any form,” said Webb, who has also done various runs such as the annual Candles For Cancer for local cancer survivors.

The avid runner also organises his own running events such as the Buco King Adventure race and a portion of the proceeds from each of his events is given to the SPCA.

“I am very passionate about running and about the King community so it’s been wonderful to put the two together and make a difference where possible,” said Webb.

The Pink Fairy’s next appearance will be at the East London SPCA ladies tea in September, where he was invited as one of the guest speakers.

He hopes to involve more people and Pink Fairies from more towns to fundraise on an annual basis and have a troupe of fairies running the Comrades with him.

“It’s taken off beyond my wildest expectations and the people of King and the Border are just amazing in their support every year. “The Pink Fairy has received an overwhelming response. I will continue doing this as long as my legs and wings carry me.”