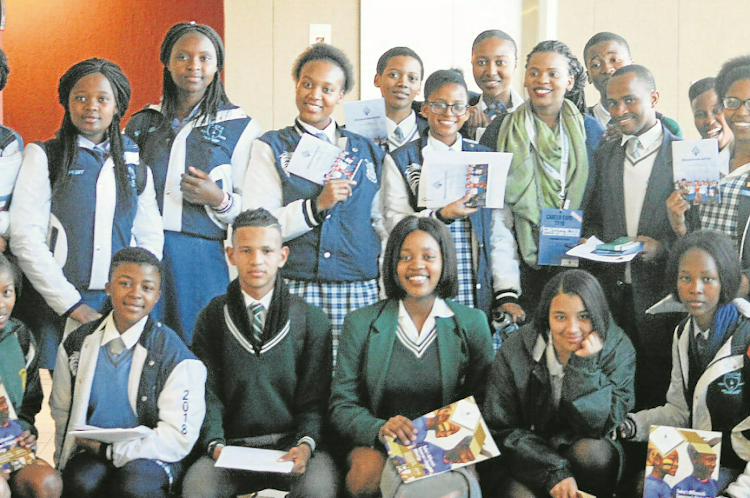 Yamkela Nkomo founder of # SupportALearner with some of the learners they help to stay on top of their schoolwork, at the Miriam Makheba Centre of Performing Arts Career expo in July
Image: Supplied

Since 2016 150 pupils from five East London high schools have been receiving tutoring.

The programme – #SupportALearner – was founded by Yamkela Nkomo, who realised some pupils were struggling to cope with the workload, as some do not have support at home because their parents or guardians might be illiterate.

The programme, which supports Grades 10 to 12, has Nkomo and 35 Walter Sisulu University and University of Fort Hare students as tutors.

They provide services to pupils at Unathi, John Bisseker, Greenpoint, Ebenezer Majombozi, School of Excellence and East London Science College, but it is also open to other individual pupils from other schools.

“We don’t want to study for them. Before they pose a question they need to first show us they tried [to solve it on their own], and we identify where they went wrong,” Nkomo said.

“I saw a poster on the noticeboard on campus and I was interested, and I have seen a lot of improvement.

“The learners and even the parents call to thank me for tutoring their children. As for Yamkela, she is a brave woman, very open and involves us in everything. She considers our views,” he said.

The organisation uses an appointment tutoring system to accommodate pupils and the tutor. They use the East London Library for the booked sessions. The organisation also helps Grade 12 pupils with university applications.

Because of the expensive data prices, the Destiny Family Church allows the do-gooders to use their office laptops and wi-fi.

In July they hosted a career expo at the Miriam Makeba Centre of Performing Arts.

Pupils were given application forms and introduced to Course Chooser, a cellphone app that shows which courses one qualifies for according to their marks, and which universities they will be able to apply at.

Nkomo said they do most of their communicating through a WhatsApp group.

“I have friends and relatives attending in all these schools, so I know the challenges faced by these learners,” she said.

Nkomo said it was rewarding to know that she was doing her part in helping out.

“Whenever I feel discouraged, thinking it’s not even worth it and want to quit, someone comes to me and tells me they passed with the help of #SupportALearner.

“These kids just need a push in the right direction,” she said.

Qualified teachers are invited to sit in during the sessions to assess the tutors to promote quality tutoring.