Classroom of sand dunes and swells for young beach enthusiasts 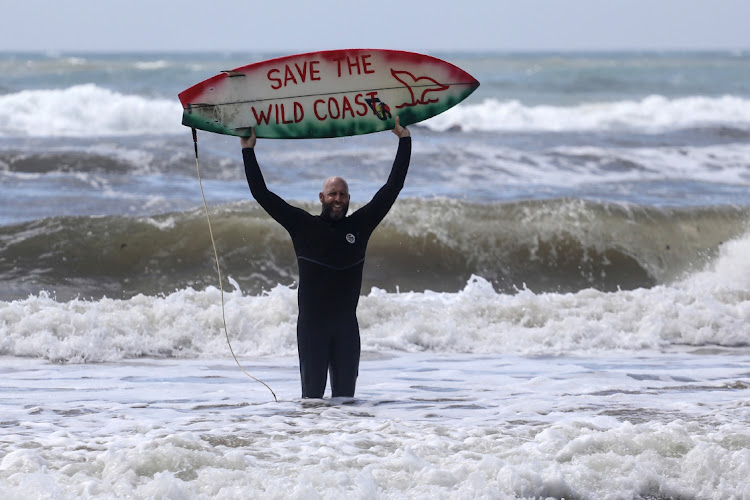 On Nahoon Beach scores of young schoolchildren have been involved in environmental programmes run by Knox’s eco-adventure and environmental organisation Joninenge.

Knox studied teaching at East London’s former Rhodes University campus and would study during the semesters and spend the holidays as a lifeguard at Nahoon Beach.

“An appreciation of the environment was instilled in me by my family,” he said.

“I spent lots of time on the beaches and estuaries of the Wild Coast where I grew up.

“Teaching and adventure have been a part of me all my life so I worked together to mix those skills and create an environmental and educational service for children.

“I’m very flattered to be nominated,” he said.

“It is an honour. I wouldn’t be able to do this alone.

“The whole team should be getting recognition, from the guides, the people who live in the community and  those who give up their time for beach clean-ups.”

Local Hero nominee Thandiswa Zazini, 38, recognised the need to help her community in Ndevana after the lockdown left young adults without ...
Local Heroes
1 month ago

The seed for Jonginenge was sown in 2005 when Knox, a teacher at Hudson Park, was allowed the opportunity to pilot the project while still teaching grade 6 pupils.

“The aim was to engage children with the environment in a positive way and instil the same appreciation I was fortunate enough to enjoy at the same age.”

The project set up offices at the East London Surf Lifesaving Club at  Nahoon Beach where Knox said he was “already part of the furniture”, having served 12 seasons as a lifeguard since he started in 1989.

“In 2006, schools started contacting me and I made the decision to accept all the inquiries and ride that wave and see where it lead —  and 17 years later we are still going strong.”

He said Jonginenge employed 10 people, some of whom were taught by Knox, who shared a love for the ocean and had the skills to facilitate and guide groups of beach learners.

The Township Surf Project, an ongoing programme,  began in 2014.

“We brought 20 children down to the beach from our Nomphumelelo Beach Project with their boogie boards and taught them how to swim and surf in the shallows.

“Since 2015 we have run the project out of the income from our business. We try to make a meaningful impact for a few children and have just taken in a new group of eight- to 10-year-olds this year.

“In total, we have 13. We want to give the children a positive experience down at the beach.”

The programme runs on either a Saturday or Sunday depending on the weather, and the youths are taught to swim in the Nahoon River or play soccer on the beach before a meal and transport home.

Knox was one of the leading voices to speak out against the planned seismic blasting off the Wild Coast by oil giant Shell.

“I wanted to light the spark. You can’t stand back and wait for someone else to take action when something like that rolls along and threatens to flatten the environment of our coast.

“I believe in letting people know why it’s wrong.”

He was the first speaker at a small gathering of protesters at Nahoon Reef which snowballed into a global protest.

He famously held up his surfboard with the words “Save the Wild Coast” painted in red across it.

“That morning I woke up and thought ‘I can do this battle’. I took my board and ran from the beach to the reef and arrived just in time to speak to the local gathering.”

Knox’s powerful speech was shared on social media in a video created by East London’s international deaf swimming champion Mark Roach, titled Save the Wild Coast, which racked up 79,841 views on YouTube.

Time again to nominate those worthy of the title Local Hero

First started in 2015, the Daily Dispatch and Johnson & Johnson Local Heroes campaign is dedicated to recognising and celebrating the incredible ...
News
1 month ago

Addressing a crowd of protesters close to Mermaid’s Pool parking lot, Knox had said: “Everything you see is protected. We can grow the groundswell of outrage that can be heard by the ministers.

“Our planet has two lungs, one is green and one is blue. If there is one thing you need to stand up for in your lifetime, it is the Wild Coast.”

Knox reflected on the event which ended with a mass protest across the South African coastline and an interim judgment from Eastern Cape judge Gerald Bloem in December which interdicted Shell from blasting on the Wild Coast.

It was a huge victory that set up a series of judgments against seismic blastics off the SA coast.

Knox said it was a demonstration of the power of social media for positive change to mobilise people to come together for a larger cause.

“East London is the gateway to the Wild Coast as a transmission zone between different climate areas, making it rich in biodiversity.

“Nahoon itself is pretty special. If you stand on the beach and look into the ocean, and if you look at the bush and the ocean, it is all protected.”

These environmental successes had strengthened his resolve to promote a movement he called The Green Ripple, in which environmentalism moves from Nahoon outwards.

Nominator Mike Loewe said:  “Dean is an organic, original local voice who has grabbed the concept of moving away from the extractive economy model to be replaced by an ecologically sensitive and regenerative economy that creates wholesome jobs and replaces fossil fuels with clean, renewable energy.”