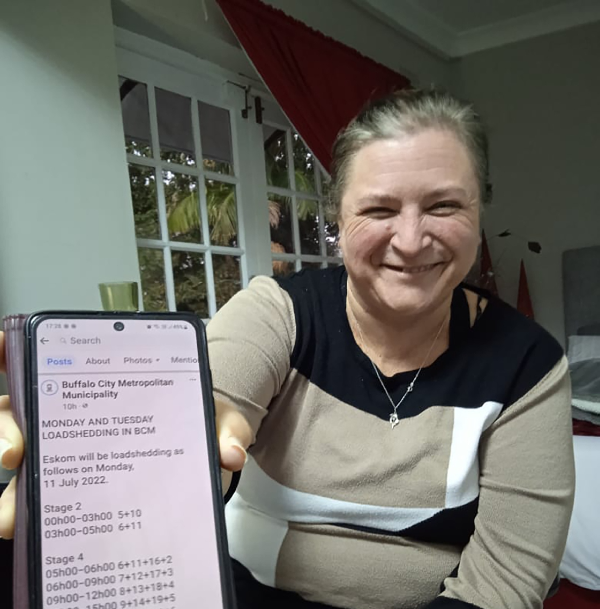 Thousands in Buffalo City know her as the oracle throwing light on the seemingly impenetrable enigma of official loaddhedding tables, but business administrator Cheryll (Corr) Smith is a humble, easy-to-chuckle single motivated by one desire only: to help people.
Image: MIKE LOEWE

This is what Cheryll Smith, 48, hears whispered in excited tones as she goes by in East London shops.

But that’s where the celebrity ends for the humble Gonubie resident who has attracted thousands of followers of her lightning fast interpretations of the techno-mish-mash of tables, blocks and numbers spat out by Eskom as it does its manic national outage writhing.

It takes the patience of a saint and the hunger of an info waste picker on a BCM tip to wade one’s way through the terrible tables.

Schedules so chaotic and ever morphing that even BCM quietly sighs, gives in — and uploads Cheryll’s edited and simplified interpretations on official online sites.

For all her work, she gets a simple credit line.

How much load-shedding has SA had this year? 74 days and counting

She chuckles as she says her Facebook page “load-shedding Buffalo City” is just little her and her cellphone, occasionally laptop.

Don’t try to tell the public that.

“Without Cheryll, we are f****d!” Gonubie homeowner and biker Tania O’Hagen exclaims.

There are 67,700 people who agree with Tania and use Cheryll’s schedules as the oracle of truth.

Even some cocky ANC youth leader who messaged her to demand “answers” on why BCM was cutting their block 17 so “often”.

“When I explained I had nothing to do with BCM, he said ‘but you are part of it by being the messenger!’.”

She does not take umbrage to this misdirected anger and arrogance. She says it is merely another expression of the rage, frustration and confusion experienced by many BCM residents over load-shedding times and area blackouts.

“The question I get asked all the time is: What block am I in?”

No easy solutions to electricity woes, but Ramaphosa promises to do more to end load-shedding

President Cyril Ramaphosa says the outrage and frustration shown by residents towards load-shedding, which has been a reality for more than a decade, ...
News
4 weeks ago

Her credibility and accuracy as a time table reader spread like the fires she often tends to when helping keep the community-owned Gonubie Protect fire bowser hoses coupled and engines going during a crisis.

Finally even her patience caved in and she was forced to turn off the load-shedding page’s chat and ask people to message or inbox her.

Our question today — who is load-shedding Cheryll?

Louw Myburgh, pioneer of community-watch group  Gonubie Protect works closely with Cheryll — his son and her daughter are engaged. He says she works tirelessly for the group and puts us in contact with Cheryll.

At 5.30pm I arrive at her house. A small, friendly woman is waiting in the yard. She directs me down a narrow side entrance to a large Gonubie home.

Down the alley is a large plinth and ball with white pebbles.

A decoration? Then I am led into a door to a flat. It is so small one has to negotiate around a couch to squeeze in.

Inside is the most exquisite womancave. Beautiful linen, decorations and fittings, and carefully curated Wi-Fi, flat screen and “load-shedding lights”.

In the middle of this 12m by 6m flatlet, bathroom one end, kitchenette the other, is a clear desk with a tiny laptop and in an office chair sits Cheryll with her cellphone.

Eskom says its generation capacity shortages will persist over the next few weeks, meaning load-shedding will continue to be implemented for the ...
News
4 weeks ago

This is where load-shedding Cheryll runs her online help empire, for no pay, and merely because “I like to help people”.

She runs the community safety communication system for Myburgh on the weekends, and for five days of the week this single mom works hard as the credit controller for a medium-sized engineering company based at Meisie’s Halt.

It is in her private time that she first started chatting on load-shedding Buffalo City.

That was seven years ago. Her inputs were so precise and quick that the page founder, Greg Becker, soon drew her in as a page administrator and finally, in 2016, asked her to take over as he had work pressures.

“I have still never met him,” she says.

She started drawing up her own daily schedules, giving Gonubie residents their own easy-to-understand outage times. BCM officials started noticing and posting them on their sites.

The latest round of strikes, insurrection and shenanigans at Eskom have turned load-shedding into an anxious, fickle beast.

She tries to explain: “If we get hit with a stage 6 we get two blocks added to that stage, and we combine it with stage 4’s blocks. So you will have 16 blocks going off at once.”

It is about humanity. We are already living in such a hard society. Things have become so difficult for people

Get it? No ways! And this is the general public reaction born of years of official mismanagement, abuse and mistrust.

Yes, she says, “it’s a nightmare. It does take a bit of concentration”; something most residents clearly do not have the time for. They just want to know when they are going off and when they are back on.

She says BCM does try to stick to the schedule, and can sometimes take 30 minutes after switch-on times to get frequencies aligned properly to avoid transformers from fritzing and exploding.

She clearly has a talent for reading blocks, numbers and multiple mutations but her left brain genius did not show at school — “I was the worst at maths”.

The motivation which woke this side of her came from being “just a giving sort of person”.

“It is about humanity. We are already living in such a hard society. Things have become so difficult for people.”

People of Buffalo City “don’t like to not know what is going on”, she adds.

It’s needs patience and somehow she has got a lot of it.

“I bite my tongue a lot. I like to live for today, not tomorrow.”

She said being a single mom and raising a daughter who matriculated from Stirling High was enjoyable.

Cheryll worked her way from a personal assistant at Group 5 in Pretoria and then worked in East London at Kempston Finance as a loan clerk.

Load-shedding is widely dreaded, but at least residents have been able to use scheduled power outages — implemented to avert a total collapse of ...
News
4 weeks ago

Our interview ends abruptly. Load-shedding! But her room lights up with two “load-shedding bulbs”, and her UPS and inverter will keep her online through her phone.