They laughed as she died

Within a short while of this photograph being taken Nomanelwa Ngwane, aged 50, was dead. Beaten, battered and bloodied, she died horrifically after she was accused of being a witch. She was stoned, stabbed and then burned by villagers who were once her neighbours and possibly her friends. On Monday they became her killers. As she died, they laughed. 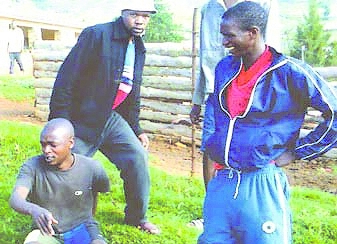 The terrible image of a sad and possibly mentally deranged woman’s brutal murder was captured by Max Mxabo, editor of a local community newspaper, who was travelling along the N2 between Mount Ayliff and Kokstad on Monday when he saw a crowd near a homestead on the roadside and stopped to investigate.

His picture has been cropped for the front page to contain the horror that we show in full, but in black-and-white, on page three.

Mxabo told DispatchLIVE: “This woman was being stoned and assaulted with sharp instruments and all sorts of things, man it was hectic. I could not believe my eyes.”

THESE people are watching a woman being killed after she was accused of being a witch in a village near Kokstad. The full picture was published on Page 3.

We wish to caution you because it is an image of exceptional brutality – the kind that has no place in any society. We tried minimising the impact of the photograph by not publishing it on the front page or in colour.

What makes the image more disturbing are the faces of the people who watched Nomanelwa Ngwane being killed. One is obviously smiling.

Our purpose is not to shock, not to sensationalise and certainly not to traumatise our readers. But we believe it our duty to highlight this form of extreme violence in our society.

The photograph makes an important statement about South Africa: 2006.

Firstly, it says that there are people in our society for whom violence and inhumane cruelty are a norm, who think nothing of maiming or murdering others.

Secondly, it says that we are a country in crisis where morality and humanity are increasingly becoming precious commodities.

We know that, by publishing this photograph, we will invite anger and criticism. We are prepared to take that risk.

Staff of the Daily Dispatch supported my decision to publish the photograph. One reporter wrote: “Publishing this picture will provoke extreme anguish and strong emotions in the readers but I think it is necessary. We have become unaffected by words like rape, attacked, beaten, killed. Words won't bring home the horror of what happened to this woman. It needs a picture.”

Our readers might wonder whether the photographer should not have intervened. This is a dilemma that has haunted journalists for generations – there are no clear answers. – Phylicia Oppelt

The attackers “struggled among one another in order to get to the woman, throwing stones and sticks at her. Wounds were visible on her whole body.”

The mob kept hitting her head with bush knives.

“They put paraffin all over her body. Her hair was burning. Some villagers were swearing at her as if she was the devil.

“They shouted ‘Bulala umthaskathi’ (kill the witch). It was as if they wanted her to die then and there.

“None of the villagers seemed to want to stop the attack.

“They said they would not take her to the police because the police were afraid of witches and the only solution was to kill a witch.”

The attack followed the woman being found naked on the doorstep of a widower, Zakahle Jakuja, in the Cabazana Administrative Area in Ntshingwana in the early hours of Monday morning.

Villagers claimed that Ngwane had “come to bewitch” the man.

Ironically, the victim had been regarded as a religious leader in the village, able to heal others

“She had been burnt with a tyre around her neck but although she was badly burnt she was still breathing.”

Diko said a case of murder had been opened but it was difficult to make an arrest because more than 200 people were suspected of having taken part.

“It was a mob and they were very violent ... like nothing I have seen before,” Diko said.

Jakuja, a cleaner at the Department of Agriculture in Kokstad, said the trouble started at around 4am while he was in his house getting ready to go to work.

He saw Ngwane on his door-step, naked, with her buttocks “facing towards me”.

“When I asked what she was doing, she told me that she and my wife had come to fetch me to a meeting, but their ‘jet’ had broken down.”

Jakuja said he was shocked because his wife had died in August after a short illness. He had been at her funeral.

Jakuja claimed Ngwane showed him hairs that she said belonged to his wife.

He said his initial reaction was to fetch a gun, but he decided instead to blow a siren to get the attention of the other villagers.

“More people came, asking her all sorts of questions so I called the police. But when they came it was already too late.”

Other villagers had already dragged Ngwane out of his yard “kicking her and throwing stones at her”.

“I asked her if she was a witch but she never answered me.

“I did not know her to be a witch, but as a person who helped others through her gift to heal,” Madadeni said tearfully.

Another villager, one of the first to arrive at the scene, said he was astonished to find Ngwane at the centre of the rumpus as she had been a great preacher who had healed many people in the village.

“She was the head of our church and we trusted and believed in her teachings, she even baptised us”.

Another resident said the victim’s stature as a woman of God had infuriated some villagers because they felt deceived and cheated.

One villager, a woman, said witches needed to be killed because if they were set free they would go back to their “evil” ways.

“If you catch a witch you are lucky.

“You must make sure you kill the witch because if you don't, you will die a mysterious death.”

Other villagers blamed the victim for the many funerals that had taken place in the village recently.

She said it was difficult to determine why the victim had gone to the man’s house naked.

“It is possible that the woman had a mental breakdown which is why she was naked, but it is difficult to conclude.”

Rhodes University anthropology lecturer Penny Bernard told the Daily Dispatch last night that such attacks sometimes occurred after a series of strange events or misfortunes, but it was difficult to establish the root cause.

She speculated that the fact that the woman had been partially naked at such an early hour might have provoked the villagers.

Kill the witch, they shouted

Journalist tells of horror as he saw woman butchered

EYEWITNESS Max Mxabo, who photographed the attack on 50-year-old Nomanelwa Ngwane with his cellphone camera, told the Daily Dispatch yesterday about stumbling on the mob frenzy.

Mxabo, who edits a community newspaper in his area, said he was travelling to Mbizana along the N2 between Mount Ayliff and Kokstad when he saw a crowd of people next to a home.

When he stopped to investigate, he was horrified to find a crowd of people in the act of killing a woman.

“This woman was being stoned and assaulted with sharp instruments and all sorts of things, man it was hectic. I could not believe my eyes,” he said.

The attackers “struggled among one another in order to get to the woman, throwing stones and sticks at her. Wounds were visible in her whole body”.

The mob were hitting her head with bush knives, Mxabo said.

“They put paraffin all over her body, but it was only her hair that was burning. Some villagers were swearing at the woman as if she was the devil himself,” he said.

“They shouted ‘Bulala Umthakathi’, kill the witch. It was as if they wanted her to die then and there. I was totally shocked because I have never seen a person being burnt like that,” Mxabo said.

He said he had taken the photograph for his community newspaper to show what people were capable of doing to one another.

None of the villagers seemed to want to stop the attack, he said.

He claimed they were saying: “Is this a priest, what type of a priest does this?”

Mxabo said one villager told him that during the beatings the victim - who, ironically was regarded as being a religious figure in the community had allegedly mentioned three names of people she had killed in the village.

“I think it was at that time that the villagers became convinced that she was a witch and that they had to kill her.

“They said they would not take her to the police because the police were afraid of witches and the only solution was to kill a witch,” Mxabo said.

“One villager said she would never go back to that church, while another said Ngwane had always been a witch but had been hiding behind her church activities,” he said.