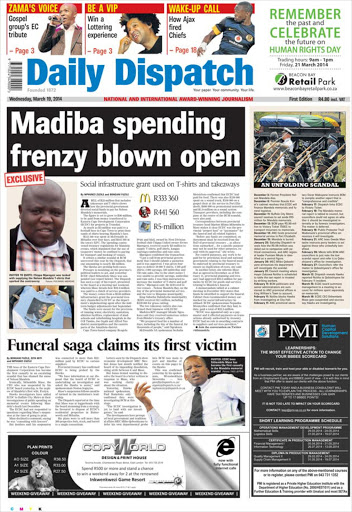 A BILL of R22-million that includes takeaways and T-shirts shows how the provincial government diverted social funds to pay for Nelson Mandela ’s memorials.

The figure is set to grow to R90-million, to be paid from money transferred to Eastern Cape Development Corporation (ECDC) for projects in Transkei.

As much as R5-million was paid to a football boss in Cape Town to print thousands of shirts bearing Mandela ’s face.

</p><p>R333 360 was spent at McDonalds in Mthatha over four days, and R441 560 at the town’s KFC. The spending contravened treasury regulations for Mandela events, which stipulated that the use of taxpayers’ money be confined to paying for transport and booking of venues.

It echoes a similar scandal at BCM uncovered this year by the Dispatch, that one amounting to nearly R6-million.

The Hawks are probing both cases.

Pressure is mounting on the province’s political leaders to act, and yesterday ECDC chief Sithembele Mase was suspended (see report below). The Dispatch has seen a copy of his report, presented to the board at a meeting last weekend, wherein Mase details how R22.2-million was paid to a clutch of service providers.

The money comes from a R330-million infrastructure grant the provincial treasury channelled to ECDC as the department's implementing agent after the mid-term budget adjustments last September.

The funds were meant for the provision of running water, electricity, sanitation, ablution facilities, replacement of mud-schools and refurbishing hospitals in the OR Tambo, Joe Gqabi and Alfred Nzo district municipalities and the eastern parts of the Amathole district.

“I got a call from provincial government that I should submit a quotation and it was approved. I was given four days to deliver 50000 T-shirts, 3500 golf shirts; 3000 sarongs, 500 umbrellas and 750 rain suits. Due to the short notice I was unable to provide sarongs, umbrellas and rain suits. I was then instructed to increase the number of T-shirts and golf shirts,” Mpengesi said. He delivered to two venues – Nelson Mandela Bay, on the day of the provincial memorial service, and the rest to Mnquma municipality.

The two takeaway outlets also confirmed their business with ECDC.

“We prepared food for a number of days, including the day of the funeral , for thousands of people,” said Ngcakaza.

McDonalds SA spokesman Sechaba Motsieloao confirmed that ECDC had paid for food. There was also R250000 spent on a sound truck, R100000 on a gospel choir at the service in Port Elizabeth, R600000 on promotional material and R1.9-million on a sound system. Transport providers, including the company at the centre of the BCM scandal, were also paid.

Correspondence between provincial treasury head Marion Mbina-Mthembu to Mase makes it clear ECDC was the provincial “project host” or “paymaster” for the funeral and all related logistics.

“Before any funds are committed, endorsement must be received from the HoD of provincial treasury ... as allocations earmarked ... for a specific purpose may not be used for other purposes, except with its approval,” she wrote.

For control purposes, any work to be paid for by provincial, local and national government relating to the funeral must be endorsed by provincial treasury to ensure no duplication of costs, she said.

In another letter, she informs Mase that as agreed in December, as of February 11, provincial planning and treasury had approved R22.2-million for payments by ECDC for goods and services relating to Mandela ’s funeral .

A memorandum tabled at a cabinet meeting in December 2013 states that funds be identified to support the funeral . Cabinet then recommended money earmarked for social infrastructure be utilised. ECDC spokeswoman Nopasika Mxunyelwa confirmed that they had, to date, paid a total of R22.2-million.

“ECDC was appointed only as a paymaster and it effected payments on transactions already authorised by treasury. ECDC had no role in awarding contracts to suppliers and services providers.”