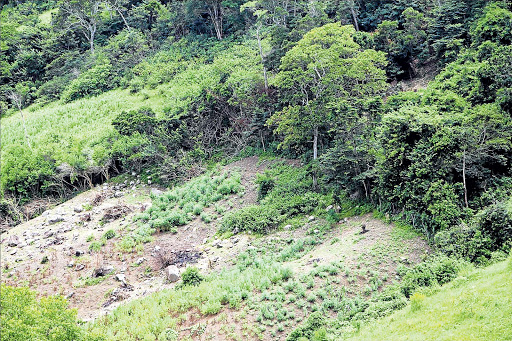 A dagga plantation that has not been sprayed by police helicopters next to a pristine forest Picture: Fields Of Green For All
THE article “Storm brews over dagga” (DD, February 17) refers. Central to the debate around the recent aerial spraying of dagga along the Wild Coast by police is the controversy around the safety of glyphosate – the active ingredient in the herbicide Kilo Max used by police in this cannabis control operation.

Weed killer containing glyphosate was developed by Monsanto for use on their genetically modified (GMO) crops.

Because these crops are resistant to the effects of the herbicide, it can be spayed all over them and will kill all weeds, other plants and grains, but not these GMO crops.

This makes it easy to control weeds and improves crop yields. But the problem is rather like drug use, once you start using the GMO crops and accompanying herbicide you get hooked into the need to use only Monsanto seeds and herbicides.

In the process the soil is destroyed, making the need to use chemical fertilisers even greater. While yields may be higher in the short term the input costs are high and the products are not only GMO and devoid of trace minerals (making them nutritionally poor) but are also contaminated by the herbicide.

Although the herbicide is widely used, its safety is increasingly being questioned as evidence of its harmful effects to humans and the environment begin to mount, directly contradicting the safety claim promoted by the agro-chemical industry.

The mode of poisoning from glyphosate may not be immediate but rather gradual and systemic, causing multiple chronic failures in the body. This is important because conventional toxicology typically tests only for short-term/immediate effects of poison and usually does not pick up longer term exposure effects

Glyphosate has already been banned in a growing number of countries, including Holland, Brazil, Sri Lanka and France. While there is a body of literature – most of it funded by the herbicide companies – claiming that glyphosate is perfectly safe to use, with minimal effect on humans and the environment (as “toxic as table salt”), there is an equally convincing and comprehensive body of popular and scientific peer reviewed literature that directly contradicts this view and urges its total ban.

This is due to the significant evidence that exposure to this herbicide can and does cause a disturbing range of health problems, including birth defects, endocrine disruption, neurotoxicity, skin irritation, skin lesions, eye irritation, allergies, respiratory problems, bioaccumulation in the organs and muscle tissue of humans and livestock, and is carcinogenic.

Views on the ecological impacts of glyphosate are also controversial. The agro-chemical industry (as well as a 2002 review sponsored by the European Union) claimed it posed a negligible risk to the environment. The opposite view however, holds that glyphosate residues cause disruption in soils by killing many beneficial micro- and macro-organisms including earthworms, and pose numerous risks to aquatic life, freshwater ecosystems, with frogs and crabs being particularly sensitive.

The potential impact of glyphosate on aquatic life and water quality has been confirmed in a study in South Africa by Rhodes University (Mensah, 2012).

A review of scientific evidence pointing out the considerable environmental and health dangers of glyphosate based herbicides, such as Kilo Max and Roundup, have been well documented by the Institute of Science in Society's Special Report (www.i-sis.org.uk/Why_Glyphosates

Should_be_Banned.php). This organisation is calling for a worldwide ban.

While an increasing number of countries are considering banning glyphosate products (they have already been banned in Brazil, Holland and France), Monsanto and the EU are lobbying for the maximum permitted levels of glyphosate to be raised 100 to 150 times!

So how can it be that such vast differences in opinion can co-exist?

There are a number of possible reasons. One is that studies of the safety glyphosate do not consider the admixtures combined with the herbicide that are used to promote dispersion.

Another likely reason has to do with the money trail. Glyphosate products are one of the mostly widely used agricultural herbicides, specifically developed for use as weed killer on GMO grain crops. More than 80% of South Africa and US grain crops are so-called “Roundup ready” genetically modified. This means there is a huge market for this product, and its banning will have a major negative financial impact on companies that peddle this poison.

Organisations like Monsanto have been known to go to extraordinary lengths to ensure their market dominance. There are even well documented cases of scientists working for Monsanto being caught and found guilty of deliberately falsifying test results at research laboratories to hide the negative effects of glyphosate.

On the other hand, the close association of glyphosate with GMO crops has not gone unnoticed by the growing anti-GMO and organic foods lobby, who are calling for the outright banning of these products, irrespective of any evidence that may show low toxicity of this herbicide.

Other reasons for the discrepancy regarding the safety of glyphosate may have to do with the duration and kinds of test done. It is inherently difficult to study the long term impacts of low level exposures to environmental toxins, or the synergistic interactions with other toxins.

Some of these toxins also have indirect systemic effects that result in a wide variety of chronic diseases that may be difficult to detect under laboratory conditions. For example, there is strong evidence to indicate that glyphosate acts like an antibiotic and that eating food infected with glyphosate will over time, cause a severe disruption of gut bacteria, negatively affecting beneficial bacteria and allowing pathogens to overgrow and take over.

For those with HIV-compromised immune systems, these disruptions can be serious (the Wild Coast has a high incidence of HIV).

After considering the available scientific literature, popular reviews and technical data sheets, it is clear the herbicide used in the Wild Coast aerial dagga operation is not safe for general use.

This is particularly so given the mode of delivery (aerial spray without any warnings). This poses an unacceptable risk of collateral non target exposure. Both the herbicide and its mode of delivery should be banned.

Cannabis patches are usually grown close to or within maize fields, homesteads, inside livestock kraals, on edges of forests and water courses. Under these circumstances, using a herbicide delivered from the air will certainly cause contamination of food crops and sensitive ecosystems, and expose humans and livestock to an unacceptable risk.

That this kind of activity can be permitted without any form of environmental authorisation and impact study, makes a mockery of our environmental laws. According to the National Environmental Management: Biodiversity Act, activities where there is unacceptable risk to humans and the environment, the precautionary principle should prevail.

As such the Wild Coast dagga ops is in direct contravention of environmental laws – or are police operations above to the law of the land?

Dr Derek Berliner is an independent ecologist, botanist and environmental consultant with a special interest and concern for the people and environment of the Wild Coast