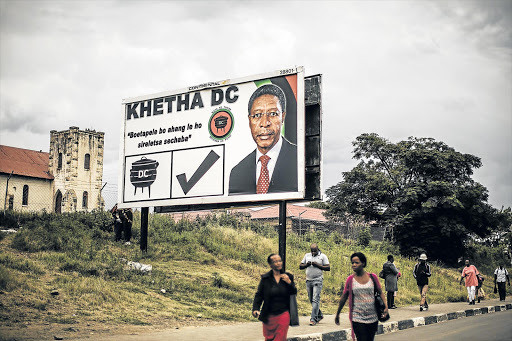 LITTLE OPTIMISM: Residents walk by an electoral campaign poster for the upcoming general assembly elections in Maseru, Lesotho. Voters from the Kingdom of Lesotho will head to the polls today to elect a new parliament Picture: AFP
Feuding parties in Lesotho’s ruling coalition will face off today in early national elections staged in a bid to restore stability six months after an attempted coup.

The vote is being held about two years ahead of schedule under a deal brokered by South Africa.

Thabane accused his deputy‚ Mothetjoa Metsing‚ of working with the army to oust him – an allegation dismissed by Metsing and the military.

Campaigning has been largely peaceful but analysts say tension is high before the parliamentary vote that will pit Thabane’s All Basotho Convention (ABC) against Metsing’s Lesotho Congress for Democracy (LCD)‚ alongside other parties.

“The idea of these elections is to try to a solve a crisis but I think they might perpetuate one‚” NKC Independent Economists political analyst Gary Staden said.

“My concern is any mess up like failure to deliver ballot papers is going to be interpreted as someone trying to rig the election and that could set off an unrest.”

Commentators have been reluctant to call a winner in the absence of reliable opinion polls.

Metsing said he expected another coalition government made up of LDC and a smaller rival‚ the Democratic Congress (DC) party.

“Immediately after our relations with ABC soured‚ we approached DC and we agreed to work together. They are our natural ally and they are the ones we’re going to form a coalition government with‚” he said.

Metsing‚ who has promised faster economic growth to create jobs‚ said the most pressing issue was peace and stability.

But there was little sign of optimism on the streets of the capital.

“Why bother voting? I am not going to waste my time to vote because this election is all about and . It has nothing to do with what we want as voters‚” said Dineo Motlou‚ a sales assistant at a supermarket chain.

Relations have been stormy between ABC and LCD‚ which have both been ruling the country since 2012‚ since Thabane dissolved parliament in June to avoid a no-confidence vote.

The state of two million people has suffered several coups since independence from Britain in 1966. Post-election unrest could further erode confidence in the economy‚ which is forecast to expand by nearly 5% this year. — Reuters