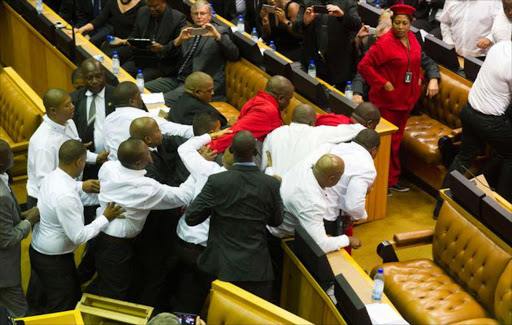 EFF condemns danger allowance for parly 'bouncers'
A journalist was assaulted by five members of the police just hours before President Jacob Zuma started answering question in Parliament this afternoon.

This is the same uniform that was worn by police and parliamentary security personally when they violently removed the EFF from the National Assembly during the State of the Nation Address last month.

The heightened police presence in Parliament since the arrival of the EFF has been repeatedly criticised by opposition parties, who argue that the increased police presence was intimidating in an environment where free political discourse was expected to take place.

Gerber said he was standing in Plein Street taking pictures when two of the men crossed the road to ask why he was taking photos and demand that he delete them. “I explained that I was a journalist but they wanted me to delete the photos. I refused and they started grabbing at the camera, ” he said.

Gerber said the police then pushed him to the ground, grabbed his camera and tired delete the pictures themselves but failed because they could not operate his camera.

“They tried to drag me into the police office, but I thought I’m not going in there. So I deleted some of the photos.”

Gerber, who sustained some scratches and bruises, said the officers did not identify themselves, but he saw that one of them had been wearing an official police tag.

He said he was intending to lay charges.

The South African National Editors Forum yesterday condemned the assault, saying the act was in contravention of police standing orders on the deleting of photographs and represented an assault on freedom of expression.

“This is the latest incident of intimidation despite promises by senior cops and (police commissioner) Riah Phiyega that such illegal behaviour will be stopped. Sanef will take this matter up with General Riah Phiyega’s office as a matter of urgency, “ said SANEF in a statement posted on social media.