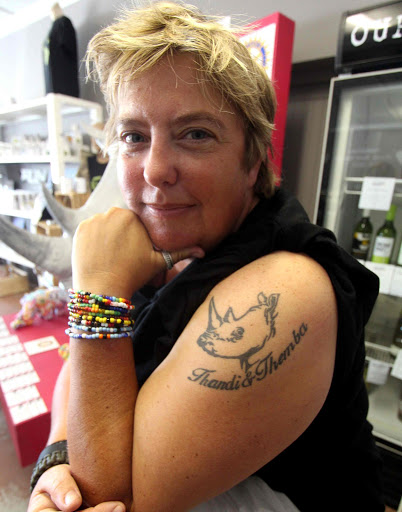 AngieGoody
A brave decision to try and save two Sunshine Coast rhino, who had their horns hacked off by poachers three years ago, changed a British farmer’s life so much she has it etched into her skin.

Arriving at Kariega Game Reserve days after Thandi and Themba were found clinging to life in the bush, Angie Goody and other volunteers helped wildlife vet Will Fowlds to try and save the animals, instead of putting them down.

“The first procedure I assisted with was life-changing,” the 40-year-old explained.

With Fowlds guiding them, volunteers helped set up drips and comforted Thandi while he sawed fractured bone off her “butchered face”.

“Although she was sedated, I remember her lips trembling and movements from her head when the bone was being removed. Her face was full of maggots, the smell of rotting flesh was stomach-wrenching.”

Arriving “naive” to the horror of rhino poaching, working with Fowlds and the animals for an intense few weeks had such an impact she returned to the Isle of Man and committed herself to saving Themba and Thandi instead.

She also started getting tribute tattoos of the two rhino and has four detailing their fight – with more to come.

Leaving the wounded animals was heartbreaking, especially when Fowlds told her as they sat next to Themba waiting for sedation to wear off, that he doubted the young bull would survive.

“Dr Fowlds told me to say goodbye as Themba was not likely to make it. I tried to hold back the tears but I couldn’t, I felt such anger and hate – I still cannot comprehend how anyone could inflict so much brutality on an animal.”

Sitting with Fowlds and Themba, she promised to go home and tell people about the plight of the two rhino and raise funds for their treatment.

In one night soon afterwards she raised £5000 (more than R90000) at a pub auction. Since 2012 she has raised more than R400000 for conservation and last year year started Thandi’s Endangered Species Association (Tesa) to try and fight broader poaching.

“I have sold my livestock back home and have rented my farm out for five years to concentrate on my conservation work and helping to save the rhino and other endangered species.

“I am grateful to Kariega Game Reserve and Dr Fowlds for letting me get involved and allowing me to be there to fight to save the rhino.”

Funds will be used to buy tracking equipment, fund anti-poaching units and purchase drones “to put eyes in the sky”.

Creating global awareness is also vital to saving the species – even if it means etching Thandi and Themba’s story into her skin from photos she took in the bush.

“I look like an ordinary chick until people see my tattoos and start asking me to tell the story behind them. The tattoos are my way of educating complete strangers about the plight of the rhino. People stop me and ask who is Thandi.”

Besides silhouettes and the names of Thandi and Themba on her back, she also has a picture of Thandi on her right arm, another of Themba on her left and a black rhino on her lower leg, as well as sharks and the big five in Africa on various parts of her body. “I already have my next one booked – little Thembi under her mom.” — davidm@dispatch.co.za