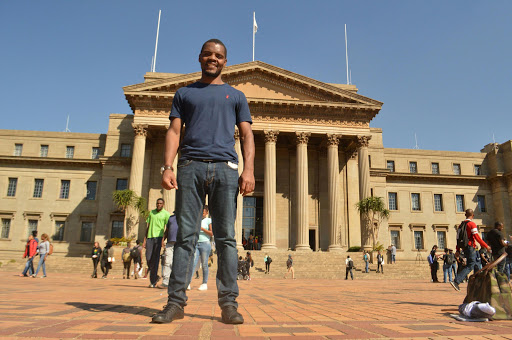 Mcebo Dlamini
Leadership in public institutions comes with responsibilities‚ Professor Adam Habib‚ Vice-Chancellor and Principal of the University of the Witwatersrand‚ said today‚ in announcing that controversial student leader Mcebo Dlamini is no longer President nor a member of the Students’ Representative Council (SRC) on campus.

Earlier this month Dlamini prompted outrage when he wrote "I love Adolf Hitler" in a Facebook post and told media "what I love about Hitler is his charisma and his capabilities to organise people. We need more leaders of such calibre".

Habib also announced today that he has referred Dlamini’s Hitler statements to the Legal Office for investigation. "This matter will take its due course‚" he said in a statement.

The Wits vice-chancellor was outspoken in his disapproval: "I believe that these comments violate the fundamental values of Wits University and that Mr Dlamini has brought our institution into disrepute. His remarks have provoked multiple complaints from people of all racial‚ political and religious persuasions‚ including a petition demanding his immediate expulsion from the University. His subsequent engagements‚ including a Facebook post in which he threatened to kill an individual and his children‚ even though he may have been provoked‚ are in my view an indication that he lacks the maturity that is required of a student leader who is meant to represent a diverse and cosmopolitan community of over 30 000 students. As someone who claims to love this institution‚ I believe that Mr Dlamini has single-handedly wrought more damage on its reputation than any other person who I can think of in at least the last two decades".

It was not the pro-Hitler comments that led to today’s suspension‚ however.

In February‚ Dlamini was found guilty of misconduct by a disciplinary panel and given a sentence that included a one year suspended exclusion which would have resulted in him having to stand down from the SRC. Habib had delayed his ousting from the SRC pending the outcome of a review of the disciplinary panel’s decision.

"This leads me to believe that he is deliberately delaying a final decision until the end of his presidential tenure. To allow this to happen would be a violation of the SRC constitution and the principle of justice. Therefore‚ after consultation with the Chair of Council‚ Dr Randall Carolissen‚ I have decided to withdraw my decision for Mr Dlamini to remain in office. As of immediately‚ he is required to stand down from his position in the SRC."

The disciplinary dating back to last year when Dlamini was accused of insulting senior members of the university staff via emails‚ according to reports in the student newspaper.

Habib‚ addressing the issue of whether Dlamini should be protected by the university’s commitment to free speech‚ said: "While I am committed to ensuring that Wits remains a free space for the contestation of ideas‚ including those with which we do not agree‚ I believe that the officials and leadership figures of this University must act in accordance with its values. Leadership in public institutions comes with responsibilities. It is incumbent on these leaders to act beyond their individual ambitions to the broader public interest".

"There are others who have argued that our responsibility in the case of errant behaviour by young leaders is to mentor and develop‚ rather than sanction. I concur‚ but mentorship and development can only be undertaken when a young leader is willing to learn. There has been continuous engagement with Mr Dlamini by many people over many months‚ and in my view‚ this has not yielded any change in his conduct.

"I am also of the view that one cannot forever appease leaders (young or old) who violate our values and resort to mobilising on the basest of human impulses. There must be consequences for their choices. Our failure as a society to hold such leaders accountable is partly why our institutions have begun to fray and why we are subjected to the challenges of corruption‚ violence‚ xenophobia‚ racism‚ sexism‚ inequality and exploitation. Wits cannot allow itself to repeat this mistake for it would destroy the very fabric of who we are."