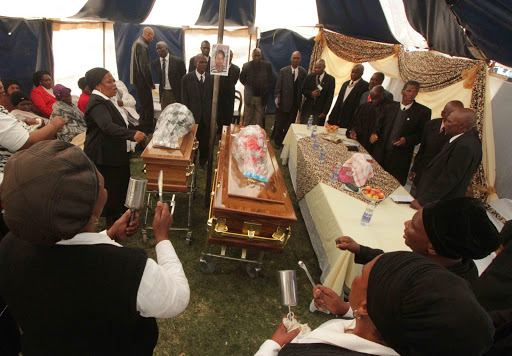 FAREWELL: Mourners sing as they pay their last respects to Nonzwakazi Nkohla and her three-year-old daughter Amile Owam Nkohla at were burial at Gwali Village in Tsolo on Saturday Picture:LULAMILE FENI
Two of the eight people whose bodies were burnt beyond recognition when a taxi they were travelling in collided with a bakkie near Beaufort West last December have finally been laid to rest.

Speaking at the funeral, Nkohla’s son Samnkelo said his family was relieved that the state had been able to identify his mother’s body and that of his sister, and that they were back home.

“This has been a traumatic four months. But now they have been buried properly. We know where their graves are, and we thank God for that,” Samnkelo, 18, said.

DNA tests had to be conducted first before all eight bodies could be identified.

The families and Uncedo Taxi Association leadership thanked Arrive Alive spokesman Tshepo Machaea for the key role he had played in speeding up the process of positively identifying the bodies and their repatriation.

Speaking at the funeral, Uncedo Taxi Association’s Sobantu Ndinga said: “If it was not for Tshepo Machaea, we might not have the bodies released even now. Although this was out of his area of jurisdiction, he worked tirelessly to ensure that the families had the bodies returned to them.”

Machaea said the repatriation of the bodies was complex and traumatic.

“It had many legal challenges. I had to deal with relatives who were calling me every day asking when the bodies of their loved ones would be released.

“I felt their pain and understood their situation. It was a very long, strenuous, traumatic and painful journey. But thank God now that is all over,” said Machaea.

Samnkelo, a Grade 11 pupil, said drivers had to be extra careful.

“If the drivers, without pointing fingers at anyone in particular, were cautious enough, my mother and my sister and all the other people would not have burnt to death.

“Drivers must always remember that their driving behaviour affects other people one way or another,” he said. — lulamilef@dispatch.co.za