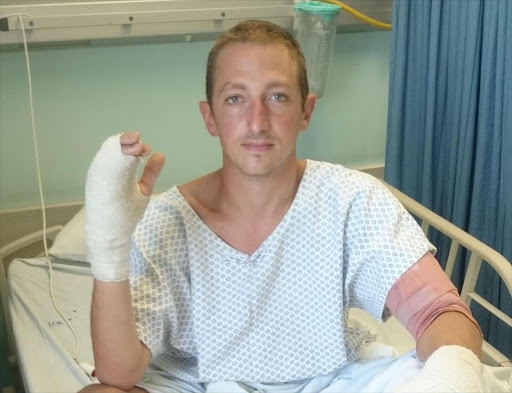 Dasnois‚ a tour guide and diver‚ was bitten on the hands and right leg by a 3.5m great white shark while diving off Port St Johns at 1pm on Saturday.

Dasnois‚ son of former Cape Times editor Alide Dasnois‚ was in good spirits on Monday morning after his near-death experience off what is widely regarded as one of the world’s most shark attack-prone beaches on earth.

There have been eight shark attacks of Port St Johns in recent years‚ most of them fatal.

Tracked down to a private hospital in Mthatha on Monday morning‚ Dasnois’s hands and right leg were heavily bandaged but he was in good spirits.

The avid spearfisherman rose up quickly from his hospital bed in the main surgical ward at St Mary’s‚ where he is receiving medical care‚ and shook hands gently with Dispatch reporter Loyiso Mpalantshane.

He repeatedly thanked the NSRI members.

"I wouldn’t be alive if it wasn’t for Debbie (Smith) and Rob (Nettleton)‚" said Dasnois.

The attack was witnessed by Dasnois’s tourist clients from PSJ backpackers‚ who got more than they bargained for when they had to help haul him into the boat Offshore 1‚ which was skippered by experienced local skipper and NSRI member‚ Nettleton.

Nettleton’s boating skills helped keep the shark at bay as he manoeuvred the craft between the shark and Dasnois‚ who was bitten and bleeding in the water.

Mathieu‚ an experienced diver‚ was on his second dive when the shark bit his hands as he tried to fend it off.

It left him alone and Nettledon drove the boat‚ which had been 20m away‚ closer to Dasnois. But the shark came up from below‚ and grabbed Dasnois’s foot and tried to pull him away from the boat.

The diver managed to free his foot and "the boat got in the way of the shark’s efforts‚ and the people onboard the boat were able to pull Mathieu into the boat"‚ said Lambinon.

"Rob Nettleton‚ although off-duty at the time‚ has been an NSRI volunteer at Port St Johns for four and a half years‚ and carries a comprehensive medical kit onboard his boat‚" said Lambinon.

"Also onboard was crew member Debbie Smith‚ also a volunteer with NSRI Port St Johns. Rob admits that their years of experience and training with NSRI kicked in automatically‚ but that everyone onboard his boat that day played a major role in the successful outcome of the incident."