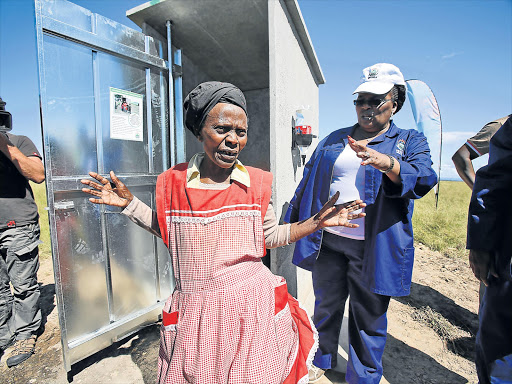 FLUSHED: Nozipho Ntintili from California village near Ngqamakwe receives her new toilet from ADM Mayor Nomasikizi Konza at the official launch of the R631-million toilet programme, which has since stalled and become mired in controversy Picture: MARK ANDREWS
The original contract used by the Amathole District Municipality (ADM) as a basis to award a R631-million sanitation tender to the controversial Siyenza Group  has been terminated.

Siyenza Group was awarded the  lucrative sanitation project by the ADM in November last year –   months after entering into a R119-million contract with the Municipal Infrastructure Support Agent (Misa) to eradicate bucket toilets in  the Northern Cape.

The Northern Cape contract was awarded   in February last year. Both contracts were due to expire at the end of this month.

Both were behind schedule.

Misa is an agency of the national Department of Cooperative Governance and Traditional Affairs (Cogta), now headed by former Finance Minister Pravin Gordhan.

The Dispatch can today exclusively reveal that the contract was terminated on June 5 after an investigation found that the Siyenza Group had submitted fraudulent tax documents to win the open tender.

Dumisa Jele, the chief of staff in Gordhan’s office, has   confirmed the cancellation of  Siyenza Group’s contract for the Northern Cape project.

The  ADM has also been informed of the decision.

This has now raised  serious questions about the status of Siyenza Group’s other sanitation contract with the ADM, as its  award was based on the Northern Cape contract.

The ADM used Section 32 of the Supply Chain Management Regulations, which allows an organ of state to participate in a contract procured by another state organ.

However, it does not allow for the  procurement of services, if the contract is bigger in price and amount of work.

Governance experts yesterday said the termination of the Northern Cape contract had rendered the ADM contract illegal. But  national government said it was up to the ADM to decide what it wants to do with its contract.

It is estimated that  Siyenza has already been paid in excess of R220-million for toilets built in  the villages of the ADM.

Treasury spokesperson Phumza Macanda said that by the end of April  Siyenza had  been paid  R215-million for  more than 20000 toilets built. The contract is for  66000 toilets.

Bongani Mpeluza, owner of Siyenza Group, had not responded to e-mailed and texted questions  at the time of writing yesterday.

The ADM would not  comment on the implications of the  termination of the contract.

ADM acting spokesperson Nonceba Vuso said the matter was under investigation by the Public Protector.

The termination  comes after a Dispatch investigation found that the Siyenza Group  was not  officially registered with the Companies and Intellectual Property Commission, which keeps  the country’s  register of companies.

Siyenza Group  also does not have the required Construction Industry Development Board  certificate,  a minimum  requirement for any company to be awarded a  contract of the magnitude of ADM’s sanitation project.

Without this grading, contractors cannot be awarded any construction work in the public service.

Riaan Visser, the governance director at Ducharme Training Institute, said it was illegal for the ADM to continue with the contract with Siyenza Group now that the original contract has been terminated.

“Regulation 32 requires for the municipality to make sure that the original contract went through a proper tendering process that is above board.

“In this case it’s clear that the tender process was flawed,” Visser said.

“If Cogta terminated the NC contract then that means now the ADM contract is not legal.

“It means that the ADM contract is in trouble because the Auditor-General will have a serious finding with regards to this.

“The municipal manager also holds a lot of risk if he is not sure that the contract is above board,” Visser added.

Dr Ndodana Nleya of the Grahamstown-based Public Service Accountability Monitor (PSAM) said the termination of the original contract had also exposed the ADM for its failure  to  exercise due diligence in the appointment of  Siyenza Group.

“The onus rested with the ADM to ensure that Siyenza had followed due process in securing the contract in the Northern Cape and that its documents were in order.”

He  added that   section 43 of the municipal supply chain regulations prohibited awarding a contract to  persons or companies  whose tax matters were not in order.