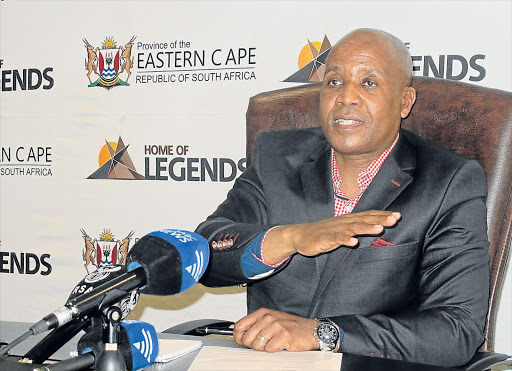 Eastern Cape premier Phumulo Masualle
Eastern Cape premier Phumulo Masualle yesterday downplayed the contents of a secretly recorded conversation between two senior government officials in which ANC provincial secretary Oscar Mabuyane is allegedly implicated in tender manipulation.  As a result, the two senior provincial administrators will in all probability escape with just a slap on the wrist.

In the recording, leaked to the paper by aggrieved businessman Sipho Leve, the two senior officials can be heard discussing Mabuyane’s alleged instructions on how a state tender should be awarded to his “boys from Ngcobo”.

The conversation took place at Mbina-Mthembu’s office on April 9.

Mabuyane has denied ever issuing such instructions.

At a media briefing yesterday at state house in Bhisho where his office is located, Masualle poured cold water on the matter saying “people were just making something out of nothing”.

“If you are looking at what has transpired with the matter, really we are talking about something that is nothing essential,” Masualle said.

He said the merits of the case “are not substantial”.

He said the allegations were meant to create “unease” in the  government.

But Masualle yesterday admitted he had not yet listened to the recording.

Asked if it was not premature to dispute allegations before he had consulted all those involved or listened to the recording, the premier replied: “Unlike you , I am not giving credence to illegally acquired conversations between people, so I will rather not alleviate this now.”

The provincial ANC yesterday said anyone with more information on the matter should report it to authorities while the party’s youth league called for an investigation into the allegations.

Youth league provincial spokesman Ayongezwa Lungisa questioned Mbina-Mthembu’s “fitness” and claimed she was part of a conspiracy to discredit Mabuyane.

“We therefore call all those with evidence on the matter to report to authorities or law-enforcement agencies to investigate the matter, or otherwise an apology must be made publicly.”

Qoboshiyane lambasted Mbina-Mthembu and Tywakadi, saying the ANC “was disappointed” with the “poor conduct” of senior state officials.

“We call on the government to investigate and correct what appears to be a normalised situation of being comfortable with interference in doing their work,” he said.

Masualle said the education department would continue to investigate the contents of Leve’s complaint.

“A complaint must be processed and heard. The person complaining must receive a report on that complaint,” he said, adding he had already met with both Mbina-Mthembu and Tywakadi over the matter.

“The former treasury head has explained to me what exactly happened. I then told her that it was wrong that you speak to your colleague in such a manner in the presence of an outsider.

“I condemned her behaviour and she acknowledged that it was an error on her part,” Masualle revealed.

The ANC has also threatened to report the matter to the press ombudsman.

“As such the ANC we will consult the press ombudsman to make a judgment on the journalistic practices and integrity of this article by the Dispatch,” Qoboshiyane said.