Surfer to wear green and gold 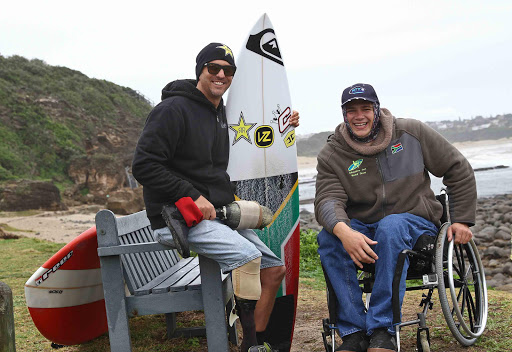 TOP FORM: Western Cape paraplegic surfer Dries Millard met East London surfer Jean-Paul Veaudry at Nahoon Reef yesterday. They will represent South Africa at the World Adaptive Surfing Championships Picture: MARK ANDREWS
When his car plummeted over a cliff seven years ago in a horror crash that snapped his spine and left him paralysed from the waist down, Dries Millard thought his chances of wearing the coveted green and gold blazer were zero.

At the time Millard, who is now 25, was an 18-year-old with bright prospects. He had just accepted a university rugby scholarship and was one of a handful of schoolboys who played rugby for Boland.

While in ICU, the T8 paraplegic was told he had been selected for the Baby Boks.

“Rugby was my life from the age of nine, so it was very frustrating to let that dream go. I got national colours, but never got to wear the jersey because I was in ICU.”

Millard, from Langebaan in the Western Cape, will soon be representing his country in another sport when he, along with East London surfer Jean-Paul Veaudry, compete in the first ever International Surfing Association (ISA) World Adaptive Championships in San Diego in September.

Before he finally dons the Springbok blazer, Millard will complete the Adaptive Surf Roadshow, which brought him to East London this week as part of his tour of South Africa’s best surf breaks.

The roadshow began in Elands Bay on the West Coast on June 20 and ends in Sodwana Bay on August 19 and so far and has taken Dries and his surf pal and helper, Skalakie Olsen, 25, from Llandudno, to Jeffreys Bay and many beaches in-between.

“Skalakie is my legs,” grinned Millard, as he tucked into a hearty Hemingways Hotel breakfast yesterday.

“The hardest part for me is getting to the water, but he pulls my beach wheelchair and helps me into the water.”

Millard, who was a keen surfer before his life-changing accident, takes to the surf on a battery-powered jet-propelled standup paddle board (SUP) complete with handle bars for turning, and railings to keep his legs on the board.

His four tail-fins are also modified to help him lean into turns.

The aim of his groundbreaking wheelchair surf safari is to show people with disabilities it is possible to achieve the exhilarating feeling of freedom or “stoke” that surfing evokes.

“I also do talks at schools and tell kids no matter what problem life throws at them, if they just focus on the problem, they won’t see the solution.”

“After the world champs I will start training for big wave surfing.

“My goal is to surf Dungeons where the waves are as high as three-storey buildings.”

He has invited anyone with any kind of disability to meet him at the Nahoon lifesavers’ shack tomorrow between 3pm and 5pm, weather permitting.

“I have wetsuits, modified surfboards and beach wheelchairs.

“The feeling of independence and freedom you get from being out of your chair and in the water is just great.” — barbarah@dispatch.co.za