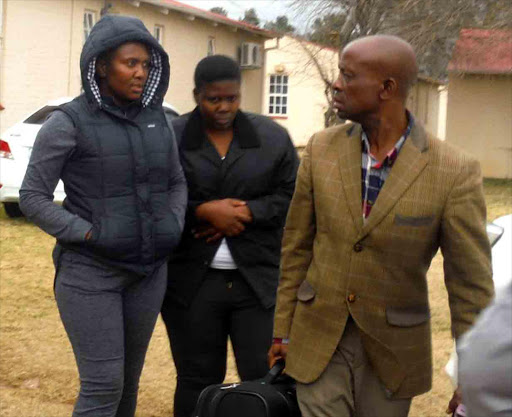 IN HOT WATER: Nyameka Qongqo, left, and her sister Thumeka, during their arrest in Queenstown Picture: ABONGILE MGAQELWA
A woman accused of stealing money from OR Tambo municipality and using it to buy a house, vehicles and furniture was arrested by the Hawks in Queenstown yesterday.

Nyameka Qongqo and her sister Thumeka were officially charged by the Hawks yesterday after months of investigation into the disappearance of R4.6-million from municipal coffers. Qongqo allegedly asked for authorisation for R2.5-million to be paid into her account under the pretence it was being paid to a service provider.

Further investigations indicated that another amount of R2.1-million was moved from the municipality’s coffers to close corporation Ogiyonke, of which Thumeka was the director.

The two sisters might appear in court today or tomorrow.

The Daily Dispatch understands another arrest will be made today, while Nyameka’s ex-boyfriend was read his rights from a jail cell.

He is behind bars on another fraud matter. — abongilem@dispatch.co.za