VIDEO: Holomisa warns protests may lead to a revolt 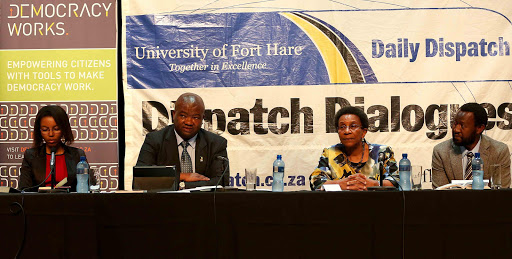 Holomisa was speaking at the Daily Dispatch and University of Fort Hare Dialogues in East London on Tuesday night.

Holomisa said South African society was on the verge of erupting in revolt if the current system was not changed.

“South Africa is marching towards a second revolution and the country needs a radical change of the electoral system.

“Once a population resists security forces, then you should do introspection,” Holomisa said.

These included a protest by more than 600 Ginsberg residents, including schoolchildren, who demanded that Buffalo City Metro (BCM) mayor Alfred Mtsi address them personally on service delivery issues outstanding since 1994.

In Ugie, 11 protesters were arrested for public violence and later granted R1000 bail each, with stringent conditions.

Elsewhere in the province, in Port Elizabeth’s Walmer township, hundreds of residents went on a rampage burning tyres and stoning cars last week to voice their dissatisfaction with service delivery.

Asked about the opinion that an “Arab Spring” was looming in South Africa, Runji said there were clear signs of people being dissatisfied with the government.

“In Egypt, revolution was started by young people – they were idle not because they wanted to be.

“The government failed to create an environment for them to reach their aspirations and that is what we see in this country,” Runji said.

On the topic of electoral reform in the country, Holomisa suggested South Africa adopt a mixed electoral system.

“There is a need for the reforms, we must consider having separate elections for the president of this country to improve accountability.

“We also should not depend on a political party to change the electoral system, we need to have a referendum where we would deal directly with the voters, where they would be asked if they want change, then political parties can go campaign for yes or no,” Holomisa said.

However, Bam said it was not only the electoral system but a number of other issues relating to political parties that needed to change.

“We are a young democracy.

“We are at a stage where we begin to implement our Constitution and test it.

“Human beings are sinful in any system, so there is no guarantee that if we change the system in our country, it would stop corruption.

“Politicians will always find a way of trying to get voters and win,” Bam said. — siphem@dispatch.co.za