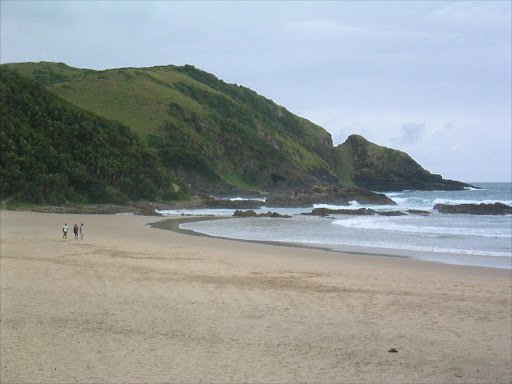 PSJBeach2
Another  fun outing to Port St Johns’s notorious but ever popular Second Beach has ended in tragedy.

A swimmer drowned early yesterday morning, just a day after a local angler drowned while fishing from a rocky outcrop.

Yesterday’s victim was identified as Sakhumzi Bavuma, 27, from Ngcobo. He had gone into the water for a swim with friends at around 9am when he was swept away by strong currents.

When the Dispatch arrived two hours later, scores of bathers were still in the water. Others were seen drinking alcohol between dips.

A few lifeguards were trying to control the bathers. One lifeguard, who asked to remain anonymous, said they worked on a voluntary basis for a few hours in the middle of the day on weekends.

Witness Siphiwo Sobopha, a taxi driver hired by Bavuma and his friends to ferry them to the popular Wild Coast destination, said the youngster had gone into the water with friends.

“One of the guys he was swimming with told us he heard him shouting, but then he himself was taken under by a huge wave. When he re-emerged, he couldn’t see him ,” Sobopha said.

Port St Johns police spokesman Captain Mduduzi Godlwana confirmed the incident. He said it was suspected that the group, including the victim, had been drinking alcohol while swimming.

Eastern Cape health spokesman Sizwe Kupelo confirmed a 40-year-old man had drowned on Saturday at around 11am while fishing but he had no further details.

The Dispatch reported last month that two Grade 9 pupils, both 16 and from Ngqeleni schools, had drowned at Second Beach.

Yesterday, the few volunteer lifeguards at the beach accused municipal bosses of having no regard for the lives of bathers.

“If we were here that man would not have drowned. It’s the same with those schoolchildren. But authorities don’t want to employ us,” two lifeguards said.

They said they only worked on Saturdays and Sundays between 11am and 2pm.

“When this man drowned, we were not here. In fact, bathers are on their own here from Monday to Friday. And the beach is full every day at this time of the year.”

The Dispatch reported two years ago that the municipality had received new equipment to be used by lifeguards in Port St Johns. But yesterday, the lifesavers said it was just sitting in the municipal offices gathering dust.

PSJ mayor Phikolomzi Langa was shocked yesterday when he heard about the two latest drownings from the Dispatch. He said the lifeguards were actually part of the problem. Only a few had applied when the municipality issued an advert calling for applications, he said. In the midst of that lifeguards had complained about salaries.

“We reached an agreement and then the issue of a fitness test came up.”

He said most had not done the tests and when they tried to rope in some SADF soldiers for their help with fitness tests, the lifesavers refused to cooperate.

The mayor said while negotiating with lifeguards, it had been agreed they would work on voluntary basis until they were given contracts. — sikhon@dispatch.co.za