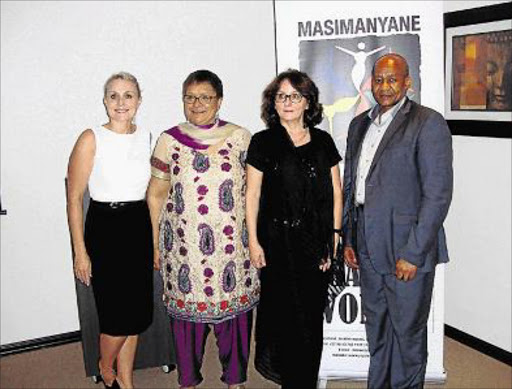 She was speaking at a dinner hosted in her honour this week by East London’s Masimanyane Women’s Support Centre.

She is in South Africa at the invitation of the government to assess the overall situation in the country of violence against women and girls, something she has described as “one of the most pervasive” human rights violations globally.

UN special rapporteurs are independent experts appointed to report to the UN on an issue affecting a nation-state or the global community. Simonovic was appointed to her three-year term in June. She had extensive experience in human rights work both in her home country and within UN structures.

She is due to present her preliminary findings on her visit to South Africa at a media conference today and will produce a final report and recommendations to the UN Human Rights Council in June.

While Simonovic acknowledged the significance of the South African constitution’s response to violence against women, she said the state needed to give practical expression to the rights in the document.

As one example, protection orders for women facing potential or real acts of violence must be immediately available. It could not be dependent on a court system that only operated during office hours.

Simonovic has been especially interested while in the country to explore how cases of violence against women are treated within the criminal justice system and victim support programmes.

Among those at Wednesday night’s dinner was East London chief magistrate Valerie Gqiba, who is the deputy chair of the Masimanyane board and is widely credited with facilitating the organisation’s support programme at the court for victims of violence.

Simonovic has made femicide – gender-related killing of women – one of the key issues of her term, calling on countries to establish a “Femicide Watch”, with a primary function to collate data on the killing of women.

“ what the official numbers are of women killed in each and every country.

“And then monitor if they are going up or down.

“Only then can we look at the killings – was it related to inefficient protection orders, the unavailability of protection shelters, or was it a lack of co-operation between police and prosecutors? What really happened in those cases?”

When she announced the Femicide Watch initiative last month, Simonovic said that the poor quality of data, alongside weaknesses in national prevention systems and lack of proper risk assessment, were major barriers in preventing gender-related killing of women.

“These weaknesses result in misidentification, concealment and underreporting of gender-motivated killings, thus perpetuating impunity for such killings,” she said then.

Simonovic found a receptive audience at the Masimanyane dinner: The organisation is already exploring ways of setting up a research project to track the killings of women in the Eastern Cape.

Anecdotal evidence points to violence against women and children being worse in this province than others but there are no verified statistics to back up the claim.

Masimanyane executive director Dr Lesley-Ann Foster said that one difficulty of the system was that the classification of murder was the same regardless of whether the victim was a man or a woman.

“Clearly we need some mechanism to track the killing of women,” she said.

The Special Rapporteur said states were primarily responsible for preventing violence against women but there were many challenges to proper implementation of UN conventions.

In South Africa these include the fact that recommendations flowing from the convention on the elimination of all forms of discrimination against women (Cedaw) had not been fully implemented.

These recommendations, commonly referred to as the international bill of rights for women, must be the basis of an “urgent” response by the SA government to the issue of violence against women, she urged.