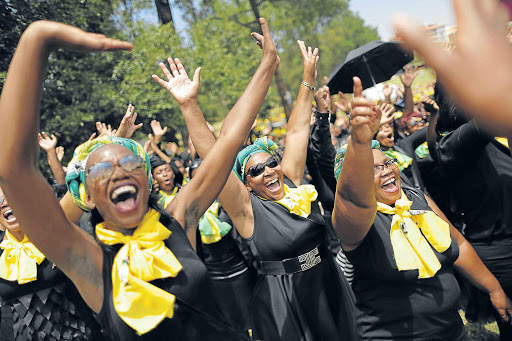 UNITED WE STAND: ANC suppor ters participate in an anti-racism march, held at the Union Buildings in Pretoria yesterday. The march was organised by the ruling ANC party in reaction to an increase in racial slurs, mostly seen on Twitter and other social media Picture: EPA
ANC members and supporters yesterday marched against racism‚ walking to the Union Buildings from Burgers Park in Pretoria.

“Down with racism‚ down,” they shouted from the back of a pick-up truck.

Mokonyane also took a swipe at blue-light vehicles‚ asking them to move away as the march started.

Mokonyane said they expected the crowd to swell to 75000.

The march got off to a slow start as organisers struggled to communicate with ANC members that it had started.

At the Union Buildings‚ Mantashe handed over a memorandum of demands to President Jacob Zuma.

The party’s black‚ green and yellow colours dominated the park. Supporters wore ANC shirts emblazoned with the words “unity nonracialism and democracy” on the back.

“We are fighting for this land. This is the land of our ancestors‚” they sang.

The South African Human Rights Commission (SAHRC), meanwhile, formally acknowledged receipt of a petition on racism from the ANC.

It said that it was deeply concerned that 20 years after democracy racism still remains a key issue for the country.

The human rights watchdog said one of the leading human rights violations reported to the commission year-on-year related to inequality‚ which accounted for about 10% of total complaints.

“Whilst many efforts have been undertaken in law and policy as well as in the establishment of institutions such as Equality Courts‚ racism still remains a key issue for the country.

“Based on our 2013-14 financial year‚ 53% of all equality-related complaints related to racial discrimination alone‚” the SAHRC said.

It noted that in January this year the country witnessed a heightened focus and debate on racism arising from social media remarks exchanged by individuals.

On January 4 the commission released a statement to the public inviting those who felt that their rights had been violated to approach the SAHRC.

It undertook to investigate all cases received.

“Since then‚ the commission has since received over 200 racism-related complaints through all its provincial offices.

“This excludes other human rights related complaints that the commission ordinarily receives through its offices located in all nine provinces across the country‚” it said.

It added that the petition from the ANC would be one of many complaints the commission would be reviewing over the next few weeks.

“The outcome of this review will be the release of a set of recommendations for remedial action by government and all other social actors concerned with transforming the culture of our country into a non-racial society‚” the commission said.

It added that on March 14 and 15 the commission would commemorate 20 years of existence and had chosen to dedicate the event to the theme of racism. — BDlive with additional reporting from Tiso Black Star Group Digital