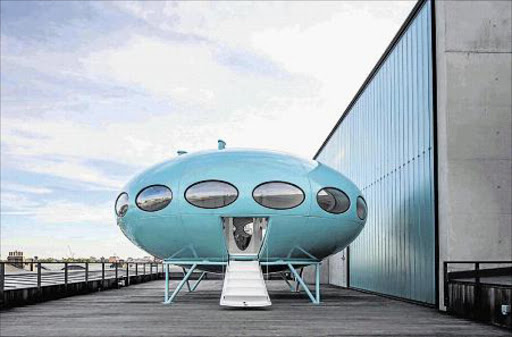 NEW LEASE OF LIFE: The restored alien spaceship Futuro house now in a London galler
A Quirky Port Alfred house inspired by an alien spaceship has been given a new lease of life on the roof of a London art gallery.

After more than 40 years in the seaside town, the iconic blue Futuro home was in dire need of repair when UK artist Craig Barnes stepped in to save it from the scrapheap three years ago.

Barnes, who is currently visiting Port Alfred, is hoping to publish a book on the house and its journey to England.

The 39-year-old appealed yesterday for help to get the history of the place as well as pictures and interviews with people who lived in it before it was moved.

Former owner Art du Randt, who had plans to move it to his Brooklyn Lodge bed and breakfast in Gonubie, yesterday said although he was sad to see the iconic spaceship leave, he was happy it was restored.

“It looks really awesome, I am stoked,” he told the Daily Dispatch.

Du Randt said the strange looking house was falling apart and badly dilapidated when Barnes called him out the blue and made an offer he could not refuse. “I really do miss it, but it needed a lot of work,” he explained.

“Craig was so adamant that he wanted it … he made me a good offer.”

Taken apart bolt by bolt and shipped to England where it was lovingly restored, the flying saucer shaped house has been placed on loan on the rooftop of Matt’s Gallery at the Central St Martins College where Barnes once studied.

The UK-born artist, who first saw the unusual house during a family visit when he was three years old, became concerned about the future of Futuro 22 in 2013 after he spotted workers demolishing a nearby garage on the High Street plot.

Fearing they would take their sledgehammers to the space ship, he tracked down Du Randt with an offer to buy it.

After buying it, the fibreglass segments of the house were unbolted on site, slice by slice.

The unique transcontinental rescue and restoration of Futuro 22 was featured on the popular George Clarke’s Amazing Spaces TV series.

Barnes, who has information on the project on www.futurohouse.co.uk, said he hopes to put together a publication of memories, photos and anecdotes of the house and the people who lived in it to celebrate the looming 45th birthday of the house.

The house, which featured several times over the years in the Dispatch, was built in South Africa a few years after Finnish architect Matti Suuronen first designed the spaceship home in 1968.

Billed as the home of the future at the time, the portable pod houses were made out of fibreglass and reinforced polyester.

Barnes can be contacted on info@futurohouse.co.uk.