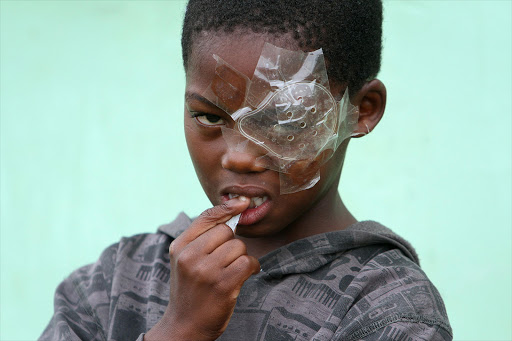 FREAK ACCIDENT: Young Zuko Bizana’s eye is in a serious condition Picture: SIBONGILE NGALWA
A Grade 2 pupil from Sinomonde Primary School in Fort Grey could lose the sight in one eye following a freak accident in which he was stabbed with a pencil.

The seven-year-old boy’s guardian, Florence Mbotoli, said the pupils were alone in the class at the time due to a staff meeting on February 27.

She said he was holding a pencil in his hand when another pupil playfully hit his hand from the side, resulting in the pencil piercing his left eye. The boy complained of a “headache” later but it was only the following day that his eye showed signs of redness and swelling.

Mbotoli said he was first taken to a clinic and then to Cecilia Makiwane Hospital.

On arrival at the hospital, he was taken into theatre where particles of lead from the pencil were removed from his eye.

He remained in hospital for a week and although home now, a second surgery is scheduled for two weeks time.

Mbotoli said the family had never received a proper explanation or any assistance from the school. “We went to the school to get more details but they wouldn’t tell us the other pupil’s name or give us his parent’s names.

“The teacher couldn’t even tell us what happened,” Mbotoli said.

“This situation is really serious because we don’t know if this child will ever be able to see with this eye again.

“All we can hope for is that his sight comes back eventually.”

School principal Vuyisile Nkohla declined to comment, saying the school had done everything necessary to resolve the situation.

Education department spokesman Loyiso Pulumani said the matter had been referred to the district director.

“This matter requires immediate action. We will definitely try and get to the bottom of this and to ensure that the family receives the support they deserve,” Pulumani said. — zisandan@dispatch.co.za