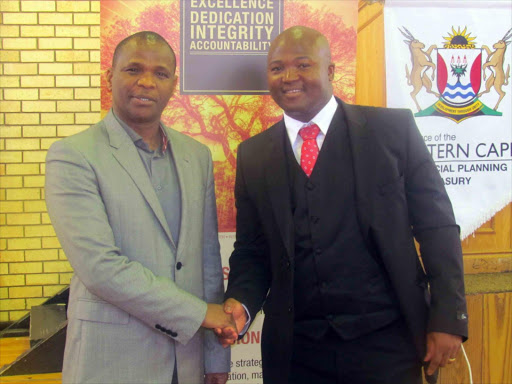 IN CHARGE: MEC for Finance Sakhumzi Somyo, left, welcomes the new head of department for provincial treasury, Daluhlanga Majeke, at a function for treasury staff yesterday in Bhisho Picture: SUPPLIED
Eastern Cape state departments cannot spend about R1-billion of their budgets and conditional grants before the current financial year ends next week.

Of the R1-billion in anticipated under-expenditure, R473.5-million was allocated as conditional grants meant for special projects. The province is now at risk of forfeiting the money to National Treasury.

This is according to a Treasury report, signed by head of department Daluhlanga Majeke, which was tabled before the legislature’s portfolio committee on finance (Scopa).

Of the conditional grants totalling R10.2-billion, only R7-billion or 69.2% had been spent by December.

“Slow spending at 41.8% by the provincial treasury, 46.8% by OTP and 64.2% by department of economic development, environmental affairs and tourism (Dedeat), which mainly oversee the social infrastructure projects, is a concern” Majeke states in the report.

The bulk of under-expenditure was on infrastructure projects within the education department – which partly explains the unpopular decision to return an unspent R530-million meant for building schools.

Majeke, however, said his department was not folding its arms.

“Sessions with the underspending departments continue in order to understand the root cause of such under-performance. It became clear that one of the fundamental challenges was poor planning on the part of departments,” wrote Majeke.

He has request each department to submit a “turnaround plan”, both to improve on spending and to inform revised cash-flow projections. Departments were also encouraged to “start now” in planning for 2016-17.

Scopa chair and UDM MPL Max Mhlathi yesterday said the province’s main challenge was not shortage of funds, but incapacity to utilise them. “This underspending is like a cancer that cannot go away. Every year money is returned due to our failure to spend. This results in them not being keen to give us more when they make future allocations.

“ ... is killing this province is capacity constraints ... as a result of the provincial government’s failure to fill critical vacant posts.”

Kupelo said: “The report in your possession is an outdated projection.

“There are commitments that have been made in the budget, and true reflection of the actual expenditure will be reflected after April 15 because in government, we don’t deal with speculations but facts.”

Majeke’s report also reveals that conditional grants amounted to R7.9-billion, with R572.4-million of that withheld by the National Treasury due to poor spending.

Majeke said at 72.6% the province was the second lowest spender behind Free State at 75%. — asandan@dispatch.co.za