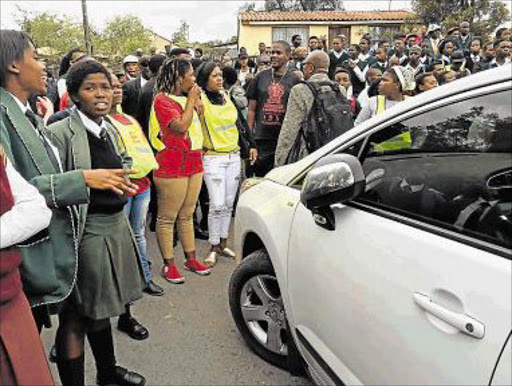 NO WAY OUT: Pupils, fed up with the poor state of their schools, block off the gates to prevent cars from leaving the premises of the department of education in Zwelitsha yesterday Picture: SILUSAPHO NYANDA
The struggle for better allocation of resources to improve school conditions continued in the Eastern Cape yesterday when thousands of pupils protested at provincial education headquarters in Zwelitsha.

Pupils from eight schools in and around King William’s Town descended on head office to demand textbooks, teachers – and safe classrooms.

The protest action came ahead of education MEC Mandla Makupula’ s scheduled tabling of the department’s budget speech at the Bhisho Legislature tomorrow.

Impatient pupils blocked off gates and prevented cars from leaving the headquarters, before a memorandum was handed over by Equal Education (EE) to department officials.

Pupils told Daily Dispatch their schools were in a bad state.

“We don’t have a proper school with normal classes but classes taking place in houses. There are also disruptions as there are taverns nearby and a bus station.”

Seyisi said they also had a shortage of textbooks and needed security guards as criminals were entering the school premises.

“There are no windows and doors can not be closed shut. There are no lights and sometimes we have to go home in rainy seasons because the classes are waterlogged.”

The pupils were organised by EE, which handed over a memorandum, demanding:

lThe appointment of a permanent head of department; and

lTransparency on how the department plans to deal with 2000 non-viable schools.

EE provincial head Lumkile Zani demanded the department respond to their memo after a week, failing which, they would approach Basic Education Minister Angie Motshekga about the situation.

“The buildings are not safe and there are no principals. The department is closing schools without consulting parents and as a result our young children have to travel far to get an education,” he said.

“There are still discussions around this issue and in the meantime there have been provisions made for water, sanitation and safe classrooms.”

He said the department would set up a meeting on Wednesday next week at which Makupula was expected to meet with the EE representatives to discuss matters raised in the memo.