Mayor up for ‘lies’: Co-accused revealed as a convicted thief 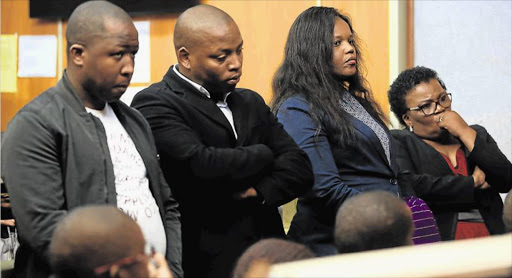 IN THE DOCK: Mayor of Amathole district municipality, Nomasikizi Konza, 53, right, in the dock with co-accused, from left: Sigcinile Saba, 31, Mawande Njeza, 30, and Nanziwe Rulashe, 36, in the East London Magistrate’s Court yesterday Picture: STEPHANIE LLOYD
The Hawks are pursuing a charge of perjury against embattled Amathole District Municipality mayor, Nomasikizi Konza, for allegedly lying under oath during her bail application on May 23.

Konza was arrested by the Hawks on the same day, in connection with an amount of R2.5-million the municipality donated to a beauty pageant late last year.

The pageant was organised by her political ally, Nanziwe Rulashe. Rulashe is the ANC ward councillor in the Nkonkobe municipality – and former chairwoman of the Municipal Public Account Committee at ADM.

It has also come to light that she was a convicted thief.

Konza was granted R15000 bail, while Rulashe was released on bail of R10000, when the initial bail application was made.

The pair were back in court yesterday to face fraud and corruption charges.

However, the Hawks yesterday morning issued the mayor with a summons, informing her she would be facing perjury charges pertaining to false information she allegedly provided during that bail application.

The matter will be treated separately from the fraud and corruption charges she faces.

The state had initially wanted to release Konza on R50000 bail, but after she told the court she could not afford it, as she was earning a monthly salary of R30000, the bail amount was reduced.

The Hawks said after further investigation, they found that Konza had lied about her salary.

The mayor is being represented by prominent attorney and acting Eastern Cape judge, Thembekile Malusi.

State advocate Diniso Ketani yesterday told the court that Rulashe had also failed to disclose in her bail application that she was a convicted thief and that there was an outstanding warrant against her, relating to identity theft.

“In terms of accused number two, Ms Rulashe, the state is in possession of new evidence to the fact that when she applied for bail , she failed to disclose to the honourable court that she has a pending matter dating back to 2009,” Ketani said.

“She also has a previous conviction. We served her with summons and we are charging her in terms of the Criminal Procedure Act.”

It emerged in court, that Rulashe was convicted of theft in Cape Town in 2004 and, in 2009, the Pretoria Magistrate’s Court had granted an arrest warrant against her for fraud, relating to identity theft.

Magistrate Robin Taylor yesterday ordered Rulashe to proceed to the bail court for her bail conditions to be readjusted in the wake of the new revelations.

Once there, magistrate Merwin Meyer postponed the matter to Monday.

Mulaudzi said the money, which the accused had claimed would cover the costs for accommodation, a gala dinner, marketing, venue hire and other logistics, was paid in two instalments into separate bank accounts, one of which had Rulashe as a signatory.

Investigations revealed that after each payment, Rulashe had allegedly bought herself a car.

The funds were allegedly transferred into their personal accounts, as well as those of Sigcinile Saba and Mawande Njeza, who were also in court yesterday.