Mqanduli court up in flames 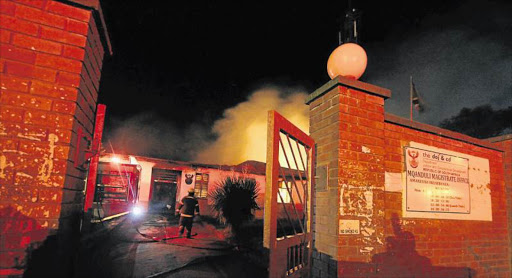 The wheels of justice temporarily stopped turning in Mqanduli after the magistrate’s court went up in flames.

Residents who travelled from various villages serviced by the court, were shocked to find the courtrooms had burnt down.

Almost the entire building was gutted by the fire, which started at about 7pm on Thursday.

“Our court officials immediately contacted the fire brigade services from the local municipality.

“The firefighters, with assistance from our court officials, managed to extinguish the fire and rescue some maintenance files and records in the prosecutor’s office.

“All other documents that were inside the offices – cash hall, clerk of the court and registry – have been destroyed, including the furniture and office equipment,” Mhaga said.

He said the department had not yet made a proper assessment of the damage, but more than 85% of the building had been damaged.

“All cases that were scheduled for today have been postponed. An investigation is currently being conducted to determine the cause of fire.

“In the meantime, court officials will be stationed at the Mqanduli police station where they will operate from and put working structures into place to ensure the smooth running of justice services,” Mhaga said.

“The department will soon communicate a sustainable plan to ensure that communities that are served by this court, continue to receive services.”

Police spokesman Major Zamukulungisa Jozana said eight offices and the only two magistrate’s courtrooms had all been damaged. Only three offices have not been affected by the fire.

Mhaga said they did not suspect foul play and forensic investigators from Port Elizabeth would be sent to Mqanduli to investigate the cause of the fire.

Jozana said two security guards came running to the police station to report that the magistrate’s court had caught fire.

“They said they heard a big bang and fire ignited after an electricity box exploded outside the building in the yard.

They tried to douse it but could not contain .

Fire fighters battled for several hours until the early morning to contain and extinguish the blaze. — lulamilef@dispatch.co.za