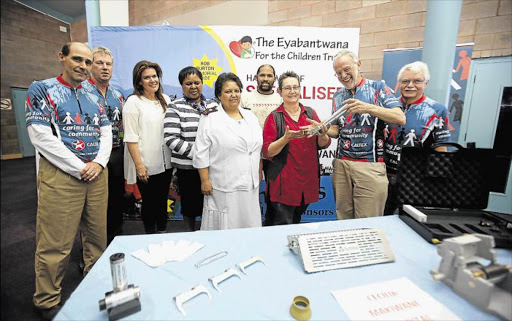 The fundraising initiatives involved a four-day cycle from East London to Stellenbosch, an extreme rock climbing challenge and a dinner with a former Miss World,

The Eyabantwana For the Children Trust and the Frere Hospital Board handed over the specialised equipment to doctors and nurses of the wards at a ceremony held at the East London Health Resource Centre yesterday evening.

Eyabantwana was formed to support the work of the paediatric surgery departments at the two hospitals.

“A burnt child is a most awful thing,” said Eyabantwana Trust chairman and head of anaesthesiology at Frere, Professor David Morrell. “They are traumatised physically and mentally.

“If anything can arouse your compassion it is a burnt child, but we didn’t have the means to care for them adequately.”

In 2014 rock climber Garvin Jacobs climbed 40 routes in a day and raised R140000, while a recent gala dinner with Miss South Africa and Miss World 2014 Rolene Strauss popped R100000 into the kitty.

Frere Hospital board chairman Dr Helmut Fritsche called yesterday’s handover an “extraordinary event” and said he was proud to present the new dermatomes on behalf of the board.

The department of paediatric surgery is one of the top such units in the country, with the Carte Blanche Make a Difference Campaign having raised millions for a refurbished children’s operating theatre.

The Eyabantwana Trust has also brought international specialists to East London who have shared their surgical expertise with local health professionals.

He paid tribute to Arthur Salzwedel, 75, the oldest member of the ride to Stellenbosch, who died a few months after the expedition when he ploughed into a pothole on a morning training ride on the North East Expressway.

Another epic Grandad’s Army fund-raising cycle will be held later this year. — barbarah@dispatch.co.za