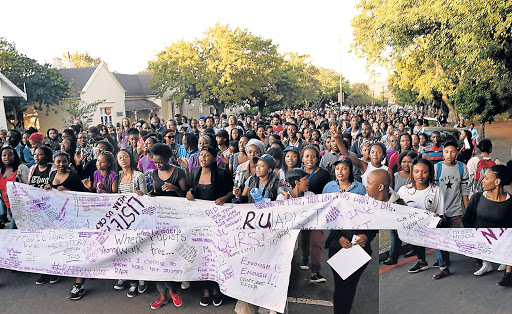 Students fighting a Rhodes University interdict prohibiting protesters from violent or unlawful behaviour have rejected allegations by the institution’s top management that they had behaved in an intimidatory or violent manner.

Rhodes was granted an interim interdict earlier this year at the height of the so-called #RUReferencelist anti-rape protest action.

Vice-chancellor Dr Sizwe Mabizela, registrar Dr Steven Fourie, finance head Dr Iain L’Ange and a number of others gave extraordinary oral evidence of how kidnappings, assaults, intimidation and vandalism had led them to fear for university property and student lives so that they felt compelled to resort to court.

The interdict prohibits students or anyone else aligned with the protest from intimidating, assaulting or threatening any member of the university community.

It also stipulates that protesters may not inhibit freedom of movement on campus or prevent the university from pursuing its academic and administrative projects.

Student Simakele Heleni says she is opposing the interdict because it has a profoundly chilling effect on protest action, criticism, debate and other awareness raising action related to rape and sexual violence against women. She denies the protest action ever included any unlawful conduct.

Mabizela, Fourie and L’Ange had recounted how groups of students had gone to residences to seek out men named as rapists on the reference list circulated on social media.

Some of the men had been detained against their will, harangued and humiliated.

All three managers said they had themselves been threatened, shoved around or held against their will.

She did acknowledge, however, that she had told hall warden Rob Benyon that if he had been in a township they would “burn him”.

She said Benyon could not reasonably have believed she was threatening him or that he was in danger.

She said the interim interdict went further than simply restraining defined unlawful conduct on the part of specific people and instead trespassed into the domain of clearly lawful and legitimate protest action.

Rhodes sociology lecturer Corinne Knowles says in an affidavit that the interdict is vague and broad and may be used to threaten staff engaging with students on concerns around rape and gender-based violence at the university and protest action to challenge it.

The academics are asking the court to set aside the interim interdict.

Heleni claimed Rhodes condoned or tolerated a range of practices that devalued women and promoted a culture of rape.