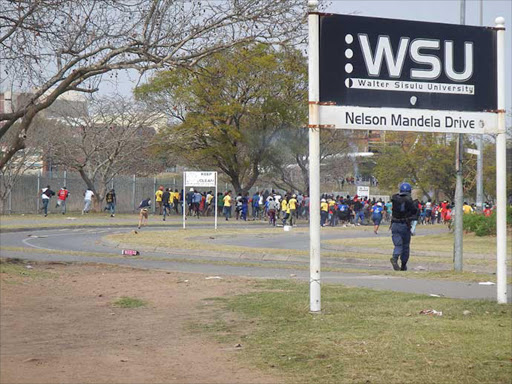 Walter Sisulu University Picture: SIKHO NTSHOBANE / FILE
As the violent protests by Walter Sisulu University students at the Nelson Mandela Drive campus  in Mthatha entered its second day, police had to fire rubber bullets and stun grenades to clear the N2 after it was barricaded with burning tyres and rocks resulting in traffic disruptions in the morning.

Several students were also arrested and charged with public violence during the fracas, according to Mthatha police spokesman Lieutenant-Colonel Mzukisi  Fatyela.

"We are continuing to monitor the situation at the moment. Police had to use rubber bullets after they went around forcing children out of schools in the vicinity and blocking the road," he said.

Earlier the spokesman claimed some cars had been damaged by the protesting students but was unable to verify that when approached in the afternoon saying he was still awaiting a report on the matter.

The Daily Dispatch reported today that thousands of WSU students had shut down the Nelson Mandela Drive campus saying the move was aimed at putting pressure on the President Jacob Zuma-appointed fees commission to release its report immediately.

However WSU's Mthatha campus SRC president  Melikhaya Mcitwa said they did not understand why the police had opened fire on them as their march had been peaceful.

While he claimed no knowledge of other schools that had been shut down in the vicinity, he said they had targeted the national road to "provoke" Higher Education Minister Dr Blade Ndzimande into releasing the report.

"Initially we were given the impression that it would be released.

He said the only reason they targeted the national road was to "provoke" a response from government.

"We want Dr Blade Ndzimande to release the report today. It was supposed to have been released in August but now they are saying it will only be released in June . We are saying tomorrow is too late," he added.

Meanwhile, SCR secretary at the campus Sthembile Mthuli said they had heard that government was contemplating a fee increase of between 6% and 8%, which many of the students at the campus cannot afford.

Higher Education spokesman Khaye Nkwanyana could not be reached for comment at the time of writing.