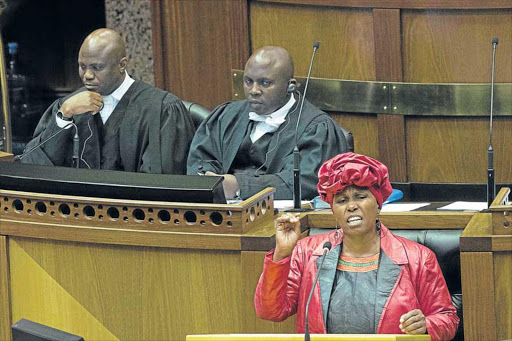 CALLING IT QUITS: Khanyisile Litchfield-Tshabalala has resigned from the United Democratic Movement Picture: TREVOR SAMSON
Former EFF member of parliament Khanyisile Litchfield-Tshabalala, who left the party to take up a post as United Democratic Movement (UDM)’s national organiser and later its deputy president, has resigned from the party.

Litchfield-Tshabalala, a former ANC uMkhonto weSizwe operative and the first woman to attain the rank of rear admiral in the South African Navy, quietly quit the UDM last week.

Her resignation was accepted by the party’s national executive committee (NEC) at its meeting in Pretoria on Saturday, with party bosses saying they would replace her by November.

This was confirmed yesterday by UDM president Bantu Holomisa, who said the party received her resignation letter last Wednesday before they endorsed its contents in their NEC meeting last Saturday.

Holomisa said that in her resignation letter, Litchfield “merely told us that her doctorate studies were not aligned with UDM policies and ideologies, and hence she wanted out”.

Litchfield-Tshabalala, who was elected deputy president in December, has been absent from party activities since the beginning of this year.

Holomisa said she had initially asked in January to take a year-long leave from politics to concentrate on her studies.

“At the time she asked us not to engage her in anything party-related as she wanted to focus on her studies.

“We were surprised when she tendered her resignation last week, which we accepted as we could not contest due to reasons she gave us for leaving,” said Holomisa.

Numerous attempts to contact Litchfield-Tshabalala proved fruitless at the time of writing yesterday.

However various sources within the party, who asked to remain anonymous for fear of victimisation, claim there was a fallout between Litchfield and Holomisa over the latter’s alleged “dictatorial style of leadership”.

Just weeks before the August 3 elections, rumours of instability and allegations of Holomisa using an iron first surfaced.

At the time members around King Sabata Dalindyebo municipality, Mhlontlo, Nyandeni and Mbhashe were said to be threatening to leave the party over what they described as “authoritarian style of leadership”.

Such details were revealed to the Dispatch in a leaked WhatsApp group conversation between some members who claimed a growing number were “unhappy and disappointed” under Holomisa.

At the time, the allegations were labelled “utter nonsense” by provincial party spokesman Mabandla Gogo.

Gogo said he was aware of the existence of the WhatsApp group and that he and Holomisa were once part of it before they asked to be removed “because we noted that it was a group of people with an agenda to destroy UDM”.

In the leaked conversation, some members threatened to leave the organisation, accusing Holomisa of being “a dictator who tramples on members’ rights and freedom”.

At the time Gogo said; “we thought the group was established to promote party programmes, but later discovered it was a group of hired mercenaries out to destroy UDM”.

Holomisa yesterday denied there was bad blood between him and Litchfield-Tshabalala.