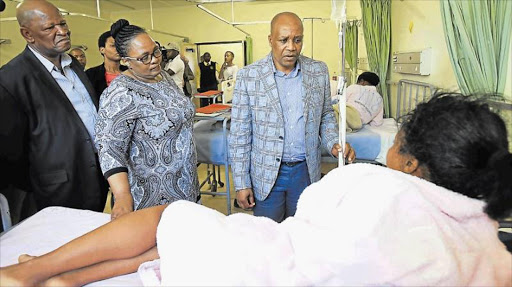 Speaking from a busy outbreak response nerve centre in East London yesterday, provincial health spokesman Siyanda Manana said it appeared the pupils might have been prematurely discharged from hospital.

After receiving treatment from a massive medical response team and spiritual leaders, the pupils were diverted to a community hall to write after villagers and priests claimed that the school hall had evil spirits.

According to education spokesman Malibongwe Mtima, preachers and spiritual leaders held a service at the school to “cleanse the bad spirit”.

The Eastern Cape departments of health and education have this week been battling a diarrhoea outbreak at schools in the King William’s Town area.

Since Monday, Grey and Bhisho hospitals have seen more than 1000 pupils from 11 schools.

Although Mtima denied that the latest incident was a similar case to the outbreak gripping the King William’s Town area, he did reveal that the pupils showed diarrhoea symptoms.

According to Mtima, one pupil started screaming in agony during the examination, complaining of severe stomach pains and headaches.

“Other learners joined in and started screaming and complaining of struggling to breathe – but it is not related to the diarrhoea.”

“We are taking this matter very seriously. All the top specialists in the province are here. We’ve been working around the clock to try and get to the bottom of this problem,” said Mtima.

Although the authorities suspect food poisoning after most pupils fell sick after eating state-funded lunches, laboratory test results will confirm the real cause.

Samples of food and water were taken by health experts earlier this week.

Manana said the results, which are with the National Health Laboratory Office in Johannesburg, would be released to the province on Monday.

On Thursday health MEC Phumza Dyantyi told the Dispatch that the common cause of the diarrhoea outbreak was believed to be contaminated milk from a supplier.

Premier Phumulo Masualle has called for schools to subject all food to an inspection before it is consumed by pupils.

The education department has cut the supply from the King William’s Town dairy to the schools while the health department experts are conducting an investigation into the dairy.

The department of education has since called for the schools to stop feeding pupils sour milk.

At the time of writing yesterday all the health and education department officials were locked in a meeting at the nerve centre.

The Dispatch had no comment from the school either. — malibongwed@disatch.co.za