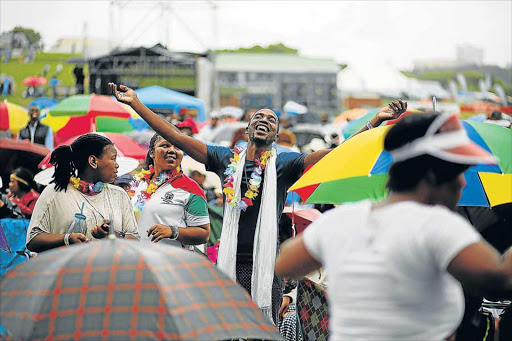 JOYOUS SOUNDS: Thousands of people from all corners of the country braved the rainy weather last year and headed to Buffalo Park Cricket stadium to watch some of the biggest names in South African music perform live during the seventh annual Buyel'Ekhaya Pan African Music Festival Picture: MARK ANDREWS
With the 2016 festive season coming up, the Buffalo City Metro has approved more than R13-million for major events expected to bring fun and generate money for the city.

Residents and visitors to the metro can look forward to a jam-packed festive calendar, with events such as the Berlin November, Buyel’Ekhaya Music Festival, Metro FM Heatwave, the East London Harbour Festival, 2017 Count Down, the Eastern Cape Music Awards and this weekend, the Daily Dispatch Cycle Tour.

The funds will also go towards the internationally recognised Africa Open golf event. East London did not host the golf event this year after the promoter did not raise enough funds to hold the tournament in March. Promoter Mbali Ngqula at the time said the event was put on hold pending meetings with sponsors and stakeholders. However, following executive mayor Xola Pakati’s funding announcement last week, councillors welcomed the news of the project being back on the cards for next year.

In a report tabled last week, Pakati requested council to approve funding for nine big events and to note seven more than had already been approved to receive funding by the metro’s sponsorship committee.

The metro was, however, lambasted by DA councillors for allegedly failing to account for how the public funds were spent by the different companies sponsored for previous events.

Councillor Chantel King said: “We are still waiting for close-out reports for these events, especially the Buyel’Ekhaya festival, where the city spent millions of rands. There is still no close-out report for last year’s event of how the money was spent and what exactly it was used for.”

Another DA councillor, Susan Bentley, questioned where the money made from the thousands of tickets sold for the festival went to. “For Buyel’Ekhaya festival the tickets go for R180 each and about 22000 people attend that event but we never know where the money goes to. It just disappears,” Bentley said.

Last year the metro injected R4.9-million towards the Buyel’Ekhaya Pan African Jazz Festival, an increase of R1.9-million from the previous financial year. This year BCM has approved only R4-million for the festival, which has been dubbed a “signature event” for the city.

A total of R2-million will go towards the Africa Open golf tournament, which is expected to attract more than 7000 spectators over four days. The city estimates the economic value of the event at R32-million.

The East London Harbour Festival, 2017 Count Down event and the Buffalo City International Festival will each get R1-million.

Pakati said the Berlin November event had been allocated R800000, the Eastern Cape Music Awards R500000, while the Mdantsane Summer Re-union, SA Master Swimming Championship and the Cruel Summer events would get R200000 each.