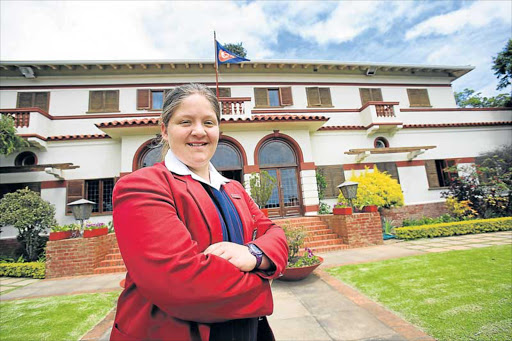 COMMUNITY SPIRIT: Hudson Park learner Sarah Kruger, 12, is actively involved in community work Picture: SINO MAJANGAZA
Hudson Park pupil Sarah Kruger has been hailed an inspiration to her peers after she became the first Grade 6 pupil to be inducted into the Hudson Port Rex Lions Cubs.

Pupils are usually only inducted in Grade 7.

The Lions Cubs is a community outreach programme that gives pupils the opportunity to get involved in community service projects on a regular basis.

Projects are student-led and offered at a variety of nonprofit agencies. Sarah, 12, has been actively involved in several spheres of community work, including collecting donations for daycare centres, retirement centres and children homes – and, most recently, in getting the Hudson Port Rex Lions Cubs and the Eco Club to adopt two penguins at the East London Aquarium.

The community outreach pastoral head, Morgan Lands, described Sarah as a humble person who believed in service before herself.

He said Sarah was a person who enjoyed making a change in her community.

“Sarah is very involved in projects. She will go as far as getting her family members involved as well. Whether it is donating her time, stationery, groceries, toys or toiletries, she always goes the extra mile.”

Lands said it was wonderful seeing the youth get involved, taking ownership of projects and doing amazing work in their communities. “I have already collected 1246 cans so far for recycling as part of ‘A Million Cans for Cansa’ project,” Sarah said.

“Being involved in projects reminds me every day to be thankful for all I have and to share with others. There is so much we take for granted,” she added. — qaqambam@dispatch.co.za