Bucks must box smart for Cosmos 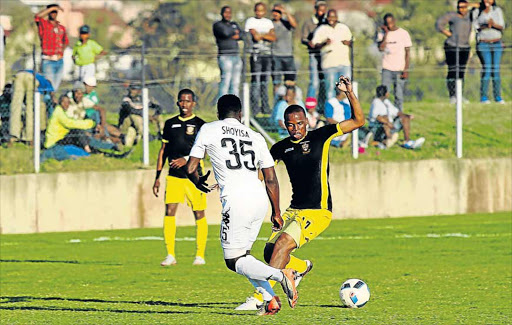 ONE GOOD TURN: Mthatha Bucks’ Mazwi Mncube, right, dribbling past Siyabonga Shoyisa of Stellebosch FC, is hoping to see Amathol’amnyama getting back to winning ways when they lock horns with Jomo Cosmos Picture: ZINGISA MVUMVU
With an impressive unbeaten record at home in over a year in the NFD, Mthatha Bucks will be hoping to continue with the impressive form at Mthatha Stadium when they welcome Jomo Cosmos on Saturday.

But while the team has not lost at home since November 2015, it has played more draws than wins.

But Bucks leading goalscorer Mazwi Mncube believes the team is ready to turn the draws into wins.

Jomo, as the 26 year-old attacking midfielder is affectionately known, has rattled the back of the net seven times in the 15 games the team has played so far.

This is an impressive record as Mncube was signed for his ability to create goals rather than score as he is not a striker.

Bucks have been unbeaten at home since November 2015.

However, in their last five games, Bucks drew four and won one while Cosmos won two, lost two and drew once.

If Bucks, who are seventh on the log are to finish in the top three and qualify for the playoffs, they need to start winning at home.

But when Amathol’amnyama met Ezenkosi on September 25 last year away, the Eastern Cape outfit lost 1-0, so they will be looking for revenge.

“Most of the teams always come with the mentality of parking the bus when they come to play in Mthatha,” said Mncube.

“They know that it’s not easy playing against us in Mthatha because of the support we enjoy.

“That negative mentality of playing for a point makes it difficult for us to break them down.

“But we have goals that we want to achieve and coach has instilled discipline in how we play. We will definitely limit the draws now and start winning on a regular basis, starting with the game against Cosmos on Saturday.”

Ezenkosi coach Jomo Sono is well known for parking the bus, especially when playing away.

The former Bafana Bafana mentor is likely to employ the same tactics as a draw against the passionate and vocal Bucks supporters, who are expected to pack the stadium, will be a good results.

“We know that they might sit back and try to catch us on the counter just like most teams that come to Mthatha,” he said.

Mncube believes with the huge support Amathol’amnyama enjoy at home, the team will turn the draws into victories.

Everything goes through the former Thanda Royal Zulu, Blackburn Rovers, Nathi Lions and Royal Eagles playmaker as he gets the team playing.

The KwaMashu-born player appealed to fans to continue supporting them.

“We know we have too many draws and that frustrates us as players and as the team. But it is their support that keeps us going,” he said.

The acquisition of PSL side Bloemfontein Celtic striker Sydney Masana and four other players during the mid-season break should ease the pressure on Jomo.

But Palmer has raised concerns about the lack of depth in his defence, saying he still wants to sign a right-back and a central defender in order to finish at least third on the log.