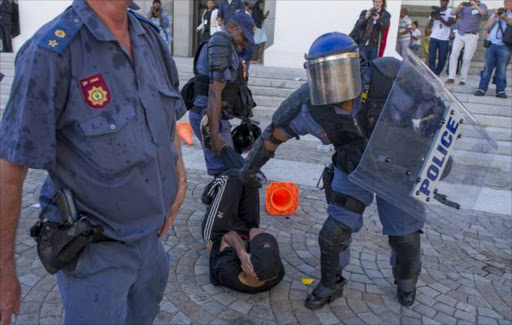 South African students protest outside the parliament precinct before forcing their way through the gates of parliament on October 21, 2015 in Cape Town. TimesLIVE
Amnesty International has slammed South African police and politicians for heavy-handed tactics in quelling protests.

The non-government organisation launched its annual report‚ titled The State of the World’s Human Rights‚ on Wednesday in Johannesburg. The report reflects on human rights in 159 countries‚ including 10 in Southern Africa.

In an analysis of South Africa’s performance‚ Amnesty International criticised the police after reports of human rights violations.

“Police used excessive force against protesters. Torture‚ including rape‚ and other ill-treatment of people in police custody continued to be reported.”

The report counted among such violations the use of rubber bullets during #FeesMustFall protests as well as cases of torture and rapes by police officers‚ reported by the Independent Police Investigative Directorate (IPID).

Amnesty International Southern Africa regional director Deprose Muchena said the number of deaths recorded as a result of police action was lower than the previous year‚ but still high.

Legal action against accused officers moved slowly‚ the report said. It referrred to incidents of violence at Durban’s Glebelands Hostel as an example.

Muchena also highlighted an incident at a #FeesMustFall protest in which student leader Shaeera Kalla was shot with rubber bullets more than 10 times‚ at close range. This he said was an example of a failure by authorities throughout the Southern African region to protect human rights‚ opting instead to suppress dissent.

“Politicians have attempted to label people demanding their rights as criminals‚ constantly intimidating‚ harassing and jailing them simply for making legitimate demands for their human rights to be respected.

“Clearly something is wrong when a government refuses to listen to the demands of its people and instead deploys police‚ using excessive force‚” he said.

The report focused on problematic incidents last year‚ but Amnesty International is investigating the deployment of more than 400 soldiers to Cape Town for the recent opening of parliament. Opposition MPs were outraged at what was considered a highly unusual move by President Jacob Zuma.

“The police and the government cannot just say it is legitimate. They need to say whether there was a need for that deployment‚ whether it was proportionate and whether it actually resulted in discouraging those who wanted to express their views from going out for fear of reprisals.”