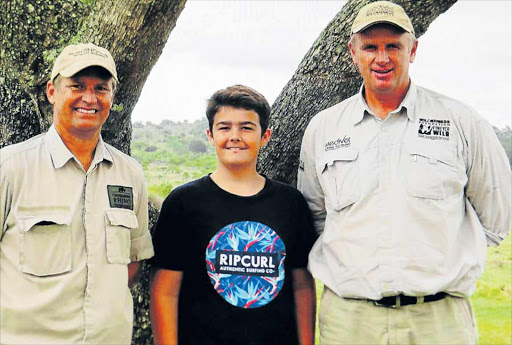 An East London teenager has raised R25000 to help save rhinos through an enterprising programme called “Rally for Rhinos” which includes a homemade dice game.

Riley Devan, 13, a Grade 8 pupil from Selborne College, has been working hard since 2013 raising funds for the project.

“I wondered how sad it would be if rhinos were extinct by the time I became a dad. I wanted to do something to help save the rhinos, so I started thinking about ways to raise money for the organisations who work to save these wonderful creatures.” he said.

And so “Rally for Rhinos” was born.

With help from his mom, Meg, Riley began selling cookies and popcorn at school, but this wasn’t bringing in enough money.

He soon had another idea to grow his initiative – he created a game called “Rolling Rhinos”.

The game, is played by rolling two little resin rhino dices, and points are scored depending on how the rhino dice lands – and the first player to reach 100 points is the winner.

The game is made locally, and is sold for R100 at markets and on Riley’s Facebook page, Rolling Rhinos.

Asked about his future plans, Riley said extending the game project was definitely at the top of the list.

“I want to see the game in more shops and markets. Between now and Rhino Day this year, I would like to have sold 500 games, and get more schools involved. If we all work together, we can win the war against poaching,” he said.

Riley received the Lord Selborne award for environmentalism from Selborne Primary School in recognition of the work that he does.

Meg said she was elated at her son’s achievements over the past four years.

“I’m so impressed, he’s come to the party and played his part. I am looking forward to more growth”, she said.

Director of the Chipembere Rhino Foundation, Brent Cook, said the work done by Riley was inspirational.

“We are humbled by the incredible support that the foundation has received from Riley.

“The funding we received enabled us to fit tracking collars to two more rhinos. This contribution goes a long way in ensuring the day to day security of these rhinos.” — nonsindisoq@dispatch.co.za