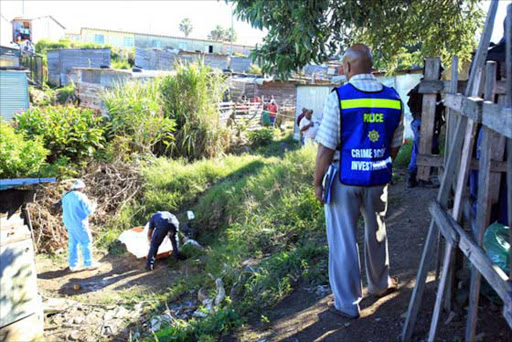 INVESTIGATION: Forensic officers gather evidence at a scene where a man was killed after exchanging fire with police officers in Duncan Village yesterday Picture: SINO MAJANGAZA
A man wanted in connection with a recent raid on firearms from the Peddie police station was shot and killed yesterday by police in an East London informal settlement.

The 28-year-old, who cannot be named until his next of kin have been informed, opened fire on police in Zwelitsha informal settlement in Duncan Village.

He is believed to have been involved in the theft of about 30 firearms from Peddie police station.

The firearms, which included 9mm handguns, R5 rifles and shotguns, were discovered missing from the police station on Tuesday last week.

Police officers at the scene of yesterday’s shooting, who declined to give their names, told the Daily Dispatch they had tracked one of the suspects in the robbery.

“We were hoping that the man would help us find other suspects,” said one officer.

A group of heavily armed police officers arrived at the suspect’s shack at around 3am.

“The suspect was not there,” the officer said.

While some of the members left, others remained in the shack with the suspect’s girlfriend.

“I believe he thought all the police had left and came back to his shack.

“He knocked, but when he realised that there were police inside, he started firing shots. The officers returned fire.

“During the exchange of fire the suspect was shot and killed,” he said.

A resident, who wanted to remain anonymous, said it was around 4am when she heard footsteps on top of her shack.

“I was very scared. I thought it was people who had come to rob me.

“I was not sure whether to scream or hide under the bed.”

The woman said she later heard multiple gunshots just after 5am.

“It sounded very close to my shack. I was very scared. I have never heard so many gunshots in my life,” she said.

After about 15 minutes she went to investigate. “I went to knock on a shack next to mine but the owner refused to open saying he was scared,” she said.

Not far away she saw the body of a man with visible wounds to his arms and forehead. The area around the body was cordoned off and she saw about 20 heavily armed police officers.

Forensic officers were seen taking pictures at the scene of the shootout.

Community policing forum member Selina Lebuso said they were still in shock over what had happened.

“We have never had something like that before. When I heard the first loud bang, I was sure it was a gun. After that shots carried on non-stop. I was counting, but lost count after 10 .”

Police spokeswoman Warrant Officer Hazel Mqala said members of the provincial tracking team were following up on information of an illegal firearm at the informal settlement.

“They were assisted by the East London tactical response team,” she said.

Mqala said when the team arrived the suspect was not in his shack.

“Two members from tactical response and three members of the tracking team waited with the suspect’s girlfriend for the suspect inside his shack.

“The suspect arrived at approximately 4.50am and asked his girlfriend to open. The girlfriend opened but when he saw the police he started shooting.

“They retaliated and the suspect was fatally injured and declared dead by the paramedics. A 9mm Lorcin pistol with three live rounds was recovered,” she said.

Mqala could not confirm if the firearm was one of those stolen from Peddie.

“At the moment I cannot confirm that. We are still busy with the investigation and it is only after it has been concluded that we will be able to link it or not,” she said. — sinom@dispatch.co.za