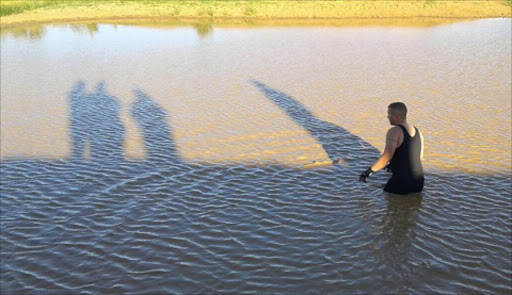 Port Elizabeth Search and Rescue divers searching for the body of little Alipheli Jack,7, who drowned on Sunday during a swimming outing on Sunday afternoon.
A Double tragedy has struck a Riebeck East family after two young cousins drowned at a farm dam outside the small village on Sunday afternoon.

The two  girls aged six and seven were living with their grandmother Stemele Jack, 61, and Eunice Nzwane, 57. A family member was forced to go into the water and recover one of the bodies while a second body was recovered by the SAPS divers. Riebeck East is a farming area that lies 42km west of Grahamstown.

The two youngsters' mothers are sisters. Govender said the incident occurred at approximately 1.20pm on a sunny Sunday. “It is believed that the children were swimming in the dam when the tragic incident took place.”

Family members were alerted about the drowning by a minor who was with the deceased pair on what was believed to be a swimming outing.

“When the local SAPS arrived one child was already retrieved by a local member of the community and after the arrival of police divers the second child was recovered.”

Grahamstown police cluster has expressed shock over the incident and have urged parents and guardians to practice vigilance over their children. Cluster Commander Brigadier David Kanuka said today "words cannot adequately express my condolences on the loss of these two young children, as no amount of words can return these children to us.

Parents and guardians are urged to keep a watchful eye on children as they are drawn to explore. Always ensure that minors are in the company of a responsible adult and that they are supervised to avoid unfortunate tragic incidents of this nature."

Jack said he had  to dive into the “deep” waters to fetch the floating body of Avusiwe Magwala, 6. He could see her head  which was showing from near the surface.

However, Jack, who said he was a fairly good swimmer, could not find the body of Alipheli Jack.

Her body was recovered by the Port Elizabeth SAPS search and rescue divers.Eunice Nzwane described her grandchildren as “playful” and “cheerful” who loved outdoor activities.